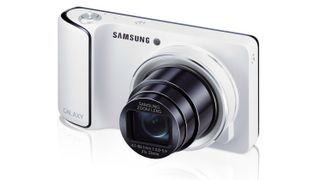 The Galaxy line continues to grow with Samsung's new camera

The wait for Samsung's Galaxy Camera may soon come to a close as the manufacturer has finally found a home for the Android-powered snapper.

AT&T will offer the Galaxy Camera in the U.S., though at the moment there aren't any details on where international customers can get their hands on one.

In addition to offering Wi-Fi compatibility, the Galaxy Camera will also be able to connect via a 4G connection.

Strangely, it won't be via AT&T's LTE network, but rather the carrier's HSPA+ network.

Even though the camera will work across the AT&T network, the carrier hasn't revealed any data pricing plans for the Galaxy Camera just yet.

In fact, AT&T hasn't discussed pricing for the camera of any sort, promising to reveal such information in the coming weeks.

TechRadar learned the Galaxy Camera should come in around £399 when it hits the U.K. in mid-October, putting it at about $630 (AU$615), but AT&T hasn't confirmed that pricing as of yet.

As for data, there's more than a slight chance the Galaxy Camera will follow suit with its smartphone brethren the Galaxy S3 and Galaxy Note 2, and work within AT&T's shared data plans.

TechRadar has reached out to AT&T, and will update this story if and when a request for comment is returned.