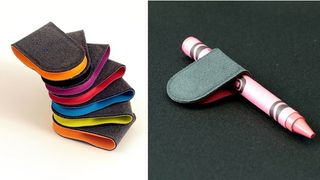 The Motorola Skip wraps easily around fingers and other objects

Who needs fingerprint scanners? Motorola's new Skip accessory might be the user authentication of the future.

Motorola is taking action in the war against passwords, and with the Moto X's Skip you'll be able to authenticate without entering a passcode or placing your thumb against the glass like you're being arrested.

The wearable doodad lets users bypass the Moto X's lock screen, and for a limited time Motorola will give it away to those who buy the phone through the online Moto Maker.

Skip also comes with three "Skip dots," stickers that can be placed in the car or at home and unlock the Moto X with a tap.

The future of authentication

AllThingsD helped to break the news of Motorola's Skip today and mentioned that the company could have even bigger authentication plans in the works.

At the site's D11 conference earlier this year, Regina Dugan, Motorola's head of advanced projects, discussed a future where users authenticate with their mobiles using swallowed pills and even tattoos. How's that for phone commitment?

But for now the Motorola Skip and Skip dots are only announced for the Moto X, releasing soon on most major carriers - including an AT&T release on Aug. 23. Motorola noted that Skip is the first step towards the futuristic "superpower-like" authentication methods it has cooking.

AT&T customers will have exclusive access for some time to Motorola's Moto Maker, which allows users to customize several aspects of the Moto X.

A Skip and three Skip dots will be made available for purchase when the Moto X launches via motorola.com, but there's no word yet on pricing.