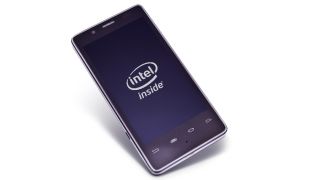 Will you be using an Intel-powered phone in a few years?

Intel's x86 processor architecture is coming soon to a smartphone near you. Or at least that's what Intel wants to happen. But should you care?

x86, of course, is shorthand for Intel's proprietary CPU instruction set. It's been around since the late 70s and it's come to completely dominate desktop PCs and laptops.

Even Apple realised resistance to x86 was futile and switched its desktop Macs and portable MacBooks from IBM's PowerPC architecture to x86 in 2006.

At that stage, x86 looked set to take over all aspects of computing. But beavering away in the background was a relatively puny British outfit known as ARM. Its CPU architectures were optimised for low power and confined spaces – just perfect for smartphones, in other words.

Intel's x86 chips, by contrast, were more powerful than anything from ARM. But more powerful means more power hungry. Until relatively recently, Intel had nothing that even came close to the tiny power envelope demanded by smartphones.

In 2008, it wheeled out the first Atom chips, a new kind of x86 designed to be massively more power efficient than any previous x86 processor. The real battle for smartphone supremacy started there.

Fast forward to 2012 and Intel has finally taken the wraps off the first x86 smartphones, powered by the Medfield revision of Atom. In the UK, your first chance to put x86 into your pocket is likely to be the Orange Santa Clara. Lenovo (with the Lenovo K800) and Motorola have also announced x86-powered models.

The first indication that it's not going to be easy for Intel is that it's taken a couple of years longer than originally indicated to get Atom chips into smartphones. What's more, Intel is keeping claims regarding performance pretty modest. The gist is that it's competitive on performance and battery life compared with existing ARM processors.

Early benchmarks of Intel's reference smartphone platform suggest Medfield is indeed quicker than the likes the iPhone 4S and Samsung Galaxy S II despite the fact that it's currently a single-core processor.

The problem for Intel is that those handsets sport relatively old dual-core ARM CPUs. By the time x86 smartphones are actually on the market later this year, much more powerful ARM chips, like Qualcomm's Snapdragon S4 Krait, the next chip in the popular Snapdragon series, will be available and will no doubt stand tall over dual-core Atom. Krait looks to be at least about as quick in dual-core format and will also appear in quad-core format.

Meanwhile several other quad-core ARM chips have popped up, including Nvidia's Tegra 3 - check out our HTC One X review. Intel has promised a dual-core follow up to Medfield, but given its tardiness in delivering the first single-core variant, we're not holding our breath.

What operating systems are supported?

Of course, that's just the hardware part of the equation. The software side is really important, too. . The good news is that the popular Android operating system has already been ported to x86. The bad news is that existing Android apps may not be compatible with an Intel phone.

Intel reckons 75 per cent of existing Android apps will run just fine. The problem is the remaining 25 per cent. The more demanding the app, the more likely it won't work. Anything with intensive graphics, including most games, are probably non-starters.

It's not that big a job to recompile such apps. But in the meantime, the plan is to software translation to allow as many apps as possible to run. Intel says the aim is roughly 90 per cent compatibility. How many and how well apps run could make or break x86 as a smartphone processor.

A similar trend can be seen in smartphones, with graphics performance becoming ever more critical as screen resolutions increase, graphics become more complex and games more sophisticated. But if there's anything Intel isn't good at, it's graphics. In fact, Intel buys in the graphics design for the Medfield Atom processor.

Unless Intel can come up with something special in-house (and there's no indication it's even trying), it won't be able to offer better graphics designs than other smartphone processors.

If that doesn't sound terribly optimistic, there is one reason to think Intel might just be able to put a supercharged smartphone in your pocket. The thing that Intel does better than anyone else is manufacture computer chips. It has the most advanced production processes and creates the smallest transistors.

Right now, it isn't making Atom processors on its most advanced 22nm process. But when the next die shrink to 14nm kicks in sometime in early 2014, Intel says Atoms will be among the first to benefit. If that happens, Intel might be able to squeeze in more CPU and graphics cores, crank up the clockspeeds, extend battery life beyond the competition or allow for slimmer smartphones than ever before.

It's a big if, admittedly. But give it a couple of years and the fastest smartphones with the longest battery life and slimmest form factors might just be Intel inside.