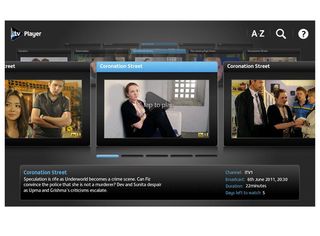 ITV has launched its first ITV Player mobile application and it's for Android, leaving iPhone owners to wait for an iOS launch.

The on-demand portal is free to download from the Android Market and offers unlimited streaming over WiFi from ITV 1, 2, 3 and 4. However, viewers in some regions will miss out on ITV 1 shows.

ITV can only show programming that it has the rights to screen on mobile platforms, so you'll be good for Corrie, Emmerdale and Britain's Got Talent for seven days after they're originally screened.

You'll need an Android phone rocking version 2.2 or above, and you'll also need to get Adobe Air 2.6 to run the ITV Player application.

iOS and Honeycomb next

The app follows the BBC iPlayer onto the Android platform, with an iOS version set to arrive soon.

ITV says that it is also planning on releasing an app that's optimised for Android Honeycomb tablets.

ITV's online kingpin Robin Pembroke says: "I'm very excited to be launching our first ever ITV Player mobile app and genuinely believe that the simple design and high picture quality of this app is a leap forward in providing our customers with what they want to watch on the move."