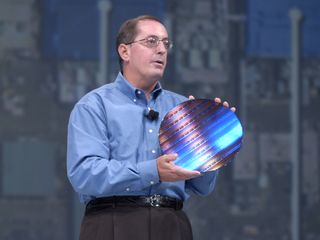 Intel says it's going to help mobile phone makers compete against Apple's iPhone - by launching a new low power, high performance CPU. However it appears that the chip is still months away from production...

"Virtually every computer and handset manufacturer is struggling to figure out how they're going to compete with Apple's iPhone," said Intel CEO Paul Otellini, who was speaking at the Morgan Stanley's Technology Conference in San Francisco.

"If we get the power and performance [of the new chip] right, it's going to be a killer combination."

The new chip will be made by Intel's semi-conductor offshoot Marvell . However it chip isn't expected for at least six months, giving the iPhone something of a head start.

The feature-intensive iPhone was announced at Macworld in January, and will be released in the US in June, before arriving here at year end.

The iPhone is rumoured to include three ARM processor cores, with a PXA 320 as the main CPU. ARM Holdings boss Warren East said that ARM processors could be found in 90% of mobile phones worldwide, according to Information Week .

Otellini also said at the technology conference that Unix-based operating systems - such as Apple's Mac OS X - were much better suited for mobile use than Windows Vista.

"Where I see Linux as an opportunity is in ultra-mobile handsets. These things are much more inclined to be a Linux or a Unix derivative kind of product like OS X," said Otellini. "The power performance footprint in terms of the kernel for Linux for ultra-mobile is quite good as opposed to the footprint for Vista.

"You can get Windows CE in there, but you sure can't get Windows Vista in there as a small kernel version, which we are nudging to do. We would like to see Microsoft do a much more power-optimised, form factor-optimised kernel," he said.