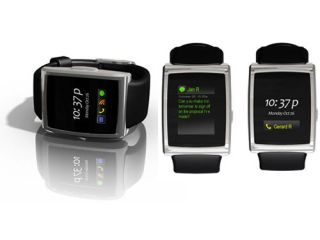 The new inPulse Smartwatch from Allerta

A new accessory has been launched for BlackBerry users to see what's going on with their favourite device without having to take it out their pocket.

The inPulse Smartwatch is made by Allerta, a new company based near RIM in Waterloo, Canada.

It features a 1.3-inch OLED display and Bluetooth connectivity to let you know when you're getting new messages on your handset, with a little vibrating motor to discreetly alert you when said info arrives.

Four days battery life is currently being quoted for the inPulse, and a 30 minute charging time via microUSB connection.

And while it sounds super cool and space age, it's essentially an extended screen for your BlackBerry, with no functionality included to message back or respond in any way.

It's coming in at around £90 when launched in the US next February, with no UK release date given (or even hinted at right now), but we'd expect it will show up on our shores at some point in the future, especially if it's a success in the US.