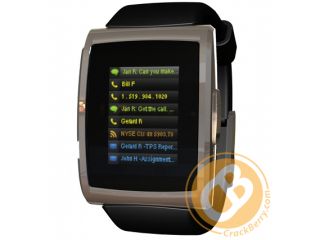 The inPulse - ready for BlackBerry?

The BlackBerry watch we heard about a few months ago has re-appeared, and looks likely to be debuting as the inPulse.

According to CrackBerry, which has posted shots of the new device, it won't be made by BlackBerry, but will work exclusively for RIM's range from a new accessory manufacturer.

The large OLED screen will allow users to see when a new message has arrived, and preview it so they can make a decision to pull out the BB and read.

It's no watch phone

It won't be a watch-phone in the style of LG's effort, as users won't be able to fire off a reply from the watch itself.

Early rumours of it allowing you to look at Facebook messages appear to be wide of the mark too, with the developers apparently planning to open up the APIs for such applications later on.

There's sadly not UK release date or price for this as yet, but the renderings look pretty real so we're hopeful it's soon.