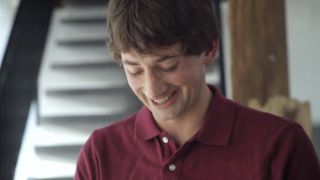 Is this man enjoying the Amazon phone, or something quite different?

I never thought I'd be hearing the words: "Oh my God. Is that THE Amazon phone in your hands?"

I've not been this excited about a closed ecosystem since I arrived too early for the Kew Botanical Gardens.

The numbers don't lie - it seems many of you ending up here are wanting to read about the almost-confirmed Amazon phone. I don't blame you either: what was once a weird rumour that bandied about on the Wall Street Journal and NY Times has suddenly become almost fact - and word is it's going to be a stormer.

While Amazon and others like HTC, Google and Samsung still have some way to go before they get the kind of rabid, slobber dribbling excitement Apple's unveilings do, credit where credit's due: I am super intrigued by this thing, and that's because it's going to be packing something clever with 3D.

We've been here before with the third dimension, remember. LG gave us a taste a few years back with the Optimus 3D, but it wasn't pleasant.

The 3D worked - kinda - but only in a separate section of the phone on certain apps and it was enough to induce a headache after too long.

And here's the double fail: the shocking battery that died just as the migraine arrived. It's pretty telling that nobody has really made any effort since.

Until now. Rumour has it that the Amazon phone will have five cameras. Although some will be infrared units, solely for the purpose of scanning your noodle to see which way you're looking, thus providing you with a true, no glasses 3D experience.

And if Amazon doesn't cock this up (*cough* 3DS *cough*), Bezos and co are on to a winner. For several reasons:

There are few companies that can unveil a technology and be guaranteed that people will buy into it. Apple has that luxury with the devs killing themselves to get to those lucrative iTunes account holders and their cash.

If Apple were to bring 3D to the masses, you can bet the developer world would go crazy busy with depth-defying amazement.

Unfortunately for Android, it's not as rosy a picture. Sorry diehards - I love your OS, but the fact is that too much fragmentation means few developers will concentrate on one particular handset. It's too diluted.

Amazon's Kindle range runs Android but it's a locked version. A walled garden of iOS proportions - and it is this that gives it security. Developers are not having to shoot into an Android shaped dark space, instead pointing directly at the bullseye of Bezos' devices (and one with users' payment details baked right in - don't underestimate that draw).

This will make it easier for Amazon to ensure a consistent experience.

What exactly Amazon has up its sleeve here is anybody's guess. And that's why it's so fascinating.

Amazon is rising up to become one of the bigger media players, with its access to movie brands and music. If we're about to finally get something that can deliver movies, games and music at a consistently low price (plus do it in 3D) then this could be the phone that I've been waiting for.

The company has nailed the eBook market and has done it successfully (albeit controversially). It could be about to bring something genuinely revolutionary to market here and the beauty is we don't yet know what it is. Part of the fun is in the guessing - although I can't wait for the June 18 to arrive.