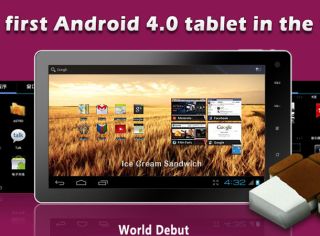 The world's first tablet running the new Android 4.0 operating system has gone on sale in China at a cost of around just £60.

The product website lists the tablet as boasting a 7-inch capacitive multi-touch display with 1080p video as well as front and rear 2-megapixel cameras.

The battery life is advertised at 25 hours for music, 6 hours for games and 7 hours for browsing the web and there's 4GB of external storage and a MIPS-based 1GHz processor powering things.

The tablet is even claiming an endorsement from Android chief Andy Rubin who said in the press release: "I'm thrilled to see the entrance of MIPS-Based Android 4.0 tablets into the market.

"Low cost, high performance tablets are a big win for mobile consumers and a strong illustration of how Android's openness drives innovation and competition for the benefit of consumers around the world."

The tablet is only on sale in China, although plans are afoot to bring the tablet west. Check out the device in the video below.