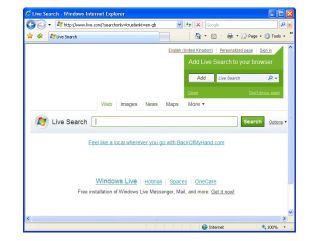 Microsoft Live Search on a roll

Microsoft's Live Search has undergone a host of improvements over the past year in an attempt to gain market share and start chipping away at Google's immense lead in the search engine war.

And while many of its improvements have been called window dressing by some pundits, it seems Microsoft has made good on its promise of becoming a better search engine.

According to Nielsen Online, Microsoft's MSN/Windows Live Search, which has been relegated to third place for quite some time, witnessed a noteworthy 71.5 percent growth in just one year, with an estimated 890.7 million search queries in September alone.

Microsoft did not comment on the study, but people close to the situation are claiming the company is quite happy with the results and expect comparable growth going forward.

On the other end of the spectrum, Google is still the online search market leader with an estimated 54 percent market share. According to Nielsen Online, the search giant answered 4 billion search queries in September.

Yahoo! claimed the second spot in the search engine rankings with a 9.3 percent growth and a market share of 19.5 percent.