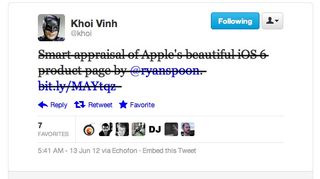 You pasted the wrong URL? You fool! *unfollows*

Turn back the hands of time - We've all been taken in by annoying internet hoaxes that we haven't been cynical enough to question before blindly retweeting them - one web design agency makes the compelling case for an after-the-fact strikethrough option that means you don't have to delete the tweet and pretend it never happened, merely own up to your mistakes and wear the lesson proudly like a Brownie badge. [iA]

Speed racer - Wi-Fi on the London Underground is apparently faster than Wi-Fi in the home, according to BroadbandChoices.co.uk which checked down- and upload speeds in both. You just wait until the rest of London cottons on to the underground Wi-Fi, though - we bet those speeds are about to hit a jam. [BroadbandChoices.co.uk]

Silly name - Contrary to what Phone Arena thinks, we have not all been at a gathering where someone talks about their last vacation and pulls out a smartphone, tries to link it to a TV and frustration ensues.

Still, we like the thinking behind Qualcomm's latest oddly-named thing, the Skifta Engine. Based on an unholy union between DLNA and UPnP tech, it's basically AirPlay for Android. Sounds good but maybe lose the weird name. [Phone Arena]

Bookish - Money made by ebooks has overtaken the income from hardcover titles for the first time in the US. It looks like this is partly down to people publishing more books as electronic distribution is easy as pie. They do say everyone has a book in them - apparently they're all getting out. [Guardian]

Feeling gloomy - Interesting read here about how people suffering from depression use the internet differently - mainly checking email and flitting between tabs and applications a lot. The piece ends with a suggestion of monitoring web use to flag up possible depressivses, which sounds a tad hokey to us. What would Freud say? Something inappropriate, probably. [NYT]

A land down under - Australia has introduced an adult classification for games in the form of R18+. Unbelievably, the highest rating before was 15, which meant that many hardcore games received minor tweaks to get the lower classifications, or, if they couldn't meet the younger-adult-friendly 15 rating, were not available in the country at all. The new rating comes into effect as of January 2013. [Gamespot]

NoBook - Even though Facebook's shares are all over the shop, Nokia's recent share-based freefall means that Mark Zuckerberg is now worth more than the entire Finnish phone company. He could now actually buy Nokia for his own personal amusement, if he wanted. We wouldn't advise it though, Zuck. [Wired]

Literally literature - It is a truth universally acknowledged that a single broadcasting corporation in possession of a relevant social game must be in want of some Austen-inspired fan-fiction. At least, that's what we're taking from the news that the BBC Worldwide is releasing a new piece of Austen-inspired fiction as an ebook to help promote its upcoming game Jane Austen Rogues and Romance. [The Verge]