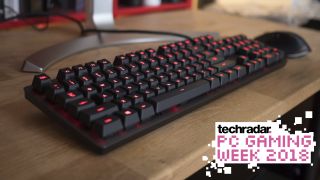 Gaming hardware these days seems to be louder than ever, with exaggerated designs and enough RGB lighting to make the Vegas strip look dull. Thankfully, that doesn’t apply to all gaming hardware, with Logitech being one of the few companies pushing hard against the tide.

The Logitech G413 is perhaps one of the best representations of a gaming peripheral with a minimalistic and sophisticated styling. Just a few years ago, the Logitech G910 Orion Spark was one of the loudest peripherals to hit the market with RGB lit faceted keys and a palm rest that favored FPS gaming.

Since then, Logitech’s newer designs, like the G610 and G810, look almost like traditional keyboards. A toned-down G910 Orion Spectrum followed soon after, and now most recently, the G413 is Logitech’s thinnest and most sophisticated keyboard yet.

“We’re noticing here is a breed of gamer who is getting to the point in their life where they do want something else than some of the more expressive designs,” Logitech G design director Will Carey says.

“Call them what you will and there’s always a place for that, but you also need to cater to people who are over 40-years-old and have a different set of expectations and needs,” Carey says. “They’re not gaming every day and want something that fits into their lives.”

That’s not to say Logitech is stepping away from serving younger gamers. Rather, Logitech G aims to include all gamers and meet more of them where they are – which is more often an office environment these days.

Carey and his team also see and hear from gamers who want a higher level of sophistication since what was expected four years ago. The changing tastes of gamers, as Carey explains, has risen along with the quality bar for everything else we buy.

“If you look at people’s reference point from the cars, the clothes, the consumer electronics they buy, you can’t deny the quality bar is rising and they want specific things,’ Carey says. “And, that’s what you are seeing being brought into some of our products.”

Logitech G’s intense focus on design is still a relatively new concept for the company. Just four years ago, design was done externally until Bracken Darrell became the new CEO of Logitech and ushered in a design-led approach.

Now, design is the first step of Logitech G’s product development process. Chris Pate, portfolio manager at Logitech G, laid out a half dozen early clay models of the Logitech Pro Gaming mouse before us during a recent visit to Logitech’s Newark, California offices.

“We wanted to basically take the design of the G102 and update it for the Logitech G Pro Gaming Mouse to include elements from the G303,” Pate elaborates.

“Although it would seem like a simple, straightforward design,” he says, “we have a ton of different iterations of prototypes that are hand sculpted, 3D printed, hard models and even functional models we can test.”

The entire design process for the Pro started off a little differently. Logitech called in a product UX researcher to establish the exact curvature and height needed make it comfortable but still relevant for gaming.

This leads to the first batch of mockups from which the team decides which aspects of the design they like. The next stage involves carving blocks of foam into general shape models.

“The curves won’t be exactly right but they’ll show those to us and we’ll look at renderings at the same time, and we’ll pick a general direction from that,” Pate explains. “We’ll test how people respond to that shape, pick a direction, take that one and expand upon it.”

This process of iterating and narrowing goes on for a few more rounds before the Logitech G team also brings in eSports gaming professionals into the process with lab testing. Essentially, the company has a room set aside to observe players’ practice with the prototype peripherals.

This might give you the picture of gamers playing while others in lab coats observe and mark down findings onto their clipboards, and that’s basically what happens – minus the lab coats. In the Logitech G team’s experience, it’s much easier and truthful to watch how people feel about a product rather than ask them to articulate it in words.

“You ask people how they feel about it, and they’ll be like, ‘oh yeah, that feels really good and comfortable,’” Pate says. “And, then you’ll watch them play like this, they don’t actually hold it the way they showed you.”

“It’s not that people are liars,” he continues. “It’s just when they answer the question they don’t necessarily understand how to put that into context of how they do things.“

Carey admits he’s only been on the Logitech G project since the end of last year. However, in a few months, he feels the important part of his job is to meet users where they are.

“It’s really important to have an amazing engineering team and technical talent, but it’s really about humanizing that experience and making it relevant to people’s everyday needs,” Carey says. “Augmentation of human control is really what we’re in the business of, and extending your capabilities to control digital worlds beyond what we know today.”