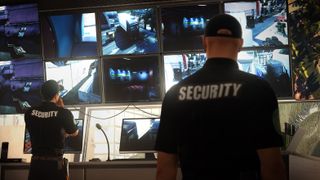 With great stealth comes great patience - that’s the saying right? Unfortunately I lack the latter, making me a poor candidate for any stealth games, and Hitman 2 is no exception.

Landing in a small Colombian town, my mission is clear: assassinate three members of the Delgado drug cartel, a Colombian organized crime family who are creating a substance known as super cocaine, as quickly and cleanly as possible.

So who are the lucky three on my radar? Rico Delgado, the head honcho and kingpin; Andrea Martinez, the Delgado's PR guru; and Jorge Franco, the ‘pharmacist’. What could possibly go wrong?

Taking care of business (sort of)

As Agent 47 wanders the small South American town - dressed like the most unfriendly tourist - you’ve ever seen, I pick up intel which points me in the best way to take out my marks. A poster tells me Rico Delgado is holding a small gathering in the town centre to celebrate the erection of a statue of himself - it’s one of the few occasions he’ll venture out of his mansion.

Making my way to the town centre, I see the stage Delgado will be taking is heavily guarded. But whispers among them tell me that the statue is built on loose foundations, so it wouldn’t take much for an ‘accident’ to occur. The problem was that the statue itself was also guarded, so I would need a new disguise.

After (several) failed attempts, I managed to distract a lazy builder with a shiny coin, knock him out and steal his clothes before legging it to a nearby garage to pick up a wrench. While the guards hunted for the builder bashing culprit, I casually made my way back to the statue to loosen the screws and subtly make my way back to the town centre. However, I’ll admit, several versions of this resulted in the guards catching on to me and me panic shooting them all before being escorted to the River Styx myself. All while a real-life Agent 47 sat beside me, silently judging my attempts.

Now the statue is loose, I can sit back and enjoy the masterful execution of my plan. Except that the band who are supposed to play have gone haywire. Excellent. Apparently, they had a big party last night and I need to round up their hungover asses. I find one passed out around the back of a house, and immediately turn the faucet on him, another is slumped over beside a generator, so I turn it on, and the third is just meandering around a bus stop. But where's the drummer?

After coming across a rather loud house, I decipher he's probably in there. So I turn off the electric, distracting a nearby resident, and then knock them out and take the house key when they come to investigate. Turns out it's all for nothing - the drummer is dead. So I pay my respects as only Agent 47 knows how and steal his drummer outfit from his lifeless corpse. RIP little drummer boy.

Now that the band is back together, I head to the stage to stand in for our fallen comrade. The sound of our sweet, sweet tones eventually lure out Rico - and Andrea. Maybe I can kill two birds with one statue-shaped stone? As Agent 47 blends into the band with some funky drum beats, Rico takes to the stage and waffles a bit. The true magic happens when he goes to pull the cover off the statue and it inevitably falls on him - crushing him but unfortunately not Andrea. One down.

The town centre is immediately on lock down,  but I intend to swan off - forgetting the buzz you get from a clean kill in Hitman - it's electric.

From this point on, things became increasingly more difficult. I spent around an hour doing the above - between constantly being caught by guards and panic shooting everyone in sight. I couldn't work out how to assassinate Andrea (although the challenge section of the menu suggested I could drop a crane on her or create some sort of cement mixer accident). I watched her walk through the town into her small safe house again and again, but couldn't see a clean way to take her out - so I moved on. Real-life Agent 47 judged in silence - "Sorry," I mutter.

For the next while I wander aimlessly through Colombia and, although I'm not technically doing what I should be, it's a vibrant and interactive world to explore. Fishermen, tourists, enlightened tourists, rich greenery and cosy bars create the sense of somewhere living and breathing - somewhere Agent 47 definitely sticks out like a sore thumb.

I eventually work out the best way to take down Jorge Franco - thanks to an overly talkative drug dealer who I overhear has baked some cocaine into a souvenir that he has ultimately broken. He's looking for some glue to stick it back together, glue which could be poisoned if I so wanted, but for the love of mercy I can not find the glue anywhere - and I accidentally dropped the poison in a tourist's drink earlier on. Time for a new plan.

While rummaging the jungle areas of the town, I come across a random security guard from the mansion - just lying on the ground. I think he's been brained by a coconut, but sensing a blessing in disguise I don't complain - instead stripping him and putting on his clothes, before heading off to the mansion to assassinate Jorge.

Long story short, I got into the mansion and it resulted in a bloodbath, before my time was up and I slinked away from the game with only one assassination. But, it turns out, where I had failed others in the session has succeeded, but some had failed to even kill Rico. What was evident was we had all completed our assassinations in completely different ways: some under the guise of a tattoo artist and other as a stealth shooter. No two games were the same.

I spent a few hours with Hitman 2 and it was nowhere near enough to sample to vast  world of Colombia and the assassination options available. However, in those few hours I found Hitman 2 offering more freedom than ever before, in a lush interactive world that we can't wait to get more time with.