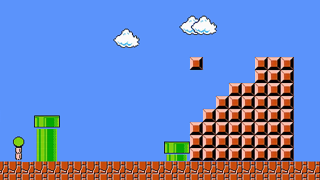 Researchers at the Georgia Institute of Technology have built a computer that can design videogame levels after watching footage of those games on YouTube. The first test? Mario, of course.

The system ignores the playable character and instead looks at the other elements on screen - pipes, coins, blocks and enemies. From that, it establishes rules - like how pipes in Mario games tend to come out of the ground, and the maximum width that a jump can be. It also looks at which sections players spend the most time on.

"An initial evaluation of our approach indicates an ability to produce level sections that are both playable and close to the original without hand coding any design criteria," said Matthew Guzdial, lead researcher on the project.

After watching 17 samples of gameplay, the system was able to output 151 different level sections, and 334 once the constraints were slackened a little. The resulting chunks can be glued together into a level and easily ported into a game engine.

Mark Riedl, who also worked on the system, said that by applying the technique across several games of the same genre, the rules of that genre could be established and entire games created algorithmically. In short, the next hit mobile game might not be designed by humans at all.

The details of the research have been published online.