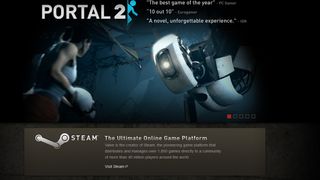 Rumours that Valve is to make its own hardware moved up a notched this week with a job post hinting that this is indeed what the company is planning to do.

The posting is for all to see on Valve's official site and it is for an electronics engineer who will be working closely with Valve's hardware team. Yes, hardware team.

A little bit of the in- and output

Other than this, it gives little away but the rumour that a Valve console is in the works looks to be bang on the money – although the hardware seems to be some time off.

This is because the post is asking for someone to "work with the hardware team to conceive, design, evaluate, and produce new types of input, output, and platform hardware."

To us,this doesn't sound like something that's even at prototype stage yet.

Valve has always been a company that's regarded as one of the best in the gaming world – so if anyone could create a set-top that melds the efficiency of Steam with console gaming, then it would be them.

It looks like the Xbox 720 and the PS4 will have some competition when they are finally released.