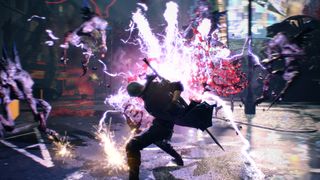 Devil May Cry 5 and Blair Witch are among the latest additions to the Xbox Game Pass roster.

During a special Inside Xbox live stream from Gamescom 2019, Microsoft announced a host of new titles joining the Xbox Game Pass service.

However, it's worth noting that Devil May Cry 5 and Stellaris are only coming to console and Ape Out and Age of Empires: Definitive Edition will only be available on PC.

Meanwhile The Bard's Tale IV, Kingdom Come: Deliverance and Blair Witch will be available on both PC and console.

All titles are due to be on Xbox Game Pass by the start of August.