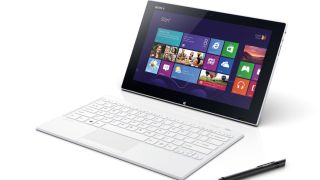 Power is a relative term when you've got a 6W Haswell-generation Intel Core architecture humming away inside your tablet. It's all at once low-power and high-powered.

Amid all the benchmarking fun in Santa Clara with Intel's new Bay Trail Atom tablet processor at the Intel Developer Forum (IDF), the engineers casually brought out this slim, unassuming black tablet, the Sony Vaio Tap 11.

We've already covered the top-end, silly-money version of the Sony Tap 11 with its i7 CPU and 2,880 x 1,600 display. This is a much more sensible option that could nevertheless give the Surface Pro a good run for its money.

It's still got the same chassis and dockable keyboard, which gives it a slimline design and a weight equivalent to that of the latest iPad, but it's running a 1080p screen and that pseudo 6W Haswell CPU, the Intel Core i5-4210Y.

But what do we mean by pseudo 6W?

The SDP is the lowest level of cooling a manufacturer needs to fit into their devices to run a given processor - but it also means the CPU will run at a slower speed.

Thermal Design Power (TDP), refers to the maximum amount of power that a PC's cooling system needs to dissipate.

The actual TDP of the i5-4210Y, running at its stated 1.5GHz is 11.5W. That's still lower than the 13W of the previous lowest Ivy Bridge generation, so kudos for that.

And if it allows for some seriously exciting tablets like this Sony Tap 11, then we're all for it. Hopefully the lower-res screen and low-power CPU can mean we get a little more than the touted six hours of battery life the top-end Sony Tap 11 is sporting too.

Intel still wouldn't be drawn on exactly when we'd see this new tablet with the low-power Haswell, or how much it would be. But given that they're running Windows 8 rather than waiting for Windows 8.1, we'd guess they're ready right now, just waiting for Sony to give them the green light to ship.

And the question of cost? Well, all Intel would say was that they would be "significantly under $1,000. It's not going to kill you..."

Obviously it depends on Intel's definition of "significantly", so that could be anywhere from $20 to $200, but this is shaping up to be an impressive tablet.