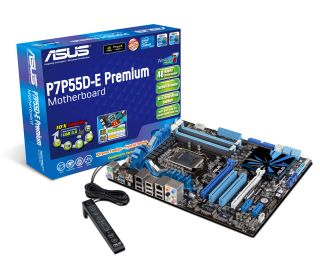 Asus has announced that it is bringing USB 3.0 to its motherboards, with the Xtreme P7P55D-E Series given on-board support.

SuperSpeed USB 3.0 is still in its early stages, but the technology is beginning to make its debut on devices across the computer world.

Asus has decided that the time is ripe for it to integrate SuperSpeed USB onto its motherboards and as well as the support on the Xtreme P7P55D-E Series, the ASUS Xtreme Design P7P55D Series 'utilises the ASUS U3S6 PCIe x4 expansion card to deliver the latest USB and SATA data transfer capabilities.'

The high end boards are based around the Intel P55 chipset, support LGA 1156 socket Core i7 and Core i5 processors from Intel and have Asus' Hybrid technology.

"This specially-designed onboard IC doubles the bandwidth of the PCIe interface from Gen 1 to Gen 2, delivering ten times faster USB 3.0 throughput compared to the previous USB 2.0 standard.

"Additionally, by eliminating transmission bottlenecks, the expansion bridge increases hard disk read and write speeds by up to 50%. Transferring a 20GB HD movie now takes less than 70 seconds, while a 4MB song requires less than 0.01sec.