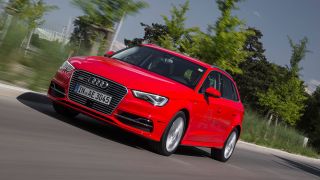 You'd never guess it's not a regular A3

As you would expect, Audi's first plug-in hybrid – the A3 Sportback e-tron – is efficient and environmentally responsible. More surprisingly, it's a blast to drive, having lifted tech from Audi's R8 e-tron prototypes,

Despite the sub-zero coolness of the R8 prototypes, fun isn't the first thing most of us think of when weighing up the pros and cons of hybrid ownership.

More likely to spring to mind is compromised performance, being a good environmental ambassador, and the supposed smugness that comes with that, as hilariously skewered by South Park. "Thaaanks!"

Arriving on our shores in March, not only is the e-tron an enjoyable drive, it's arguably more fun than its all-petrol siblings.

This comes in part from the car's redistributed weight and lower centre of gravity. Thanks to the battery mounted above the rear axle, weight distribution sits at 55-45 rather than the usual 60-40, losing the traditional A3's nose-heavy feel.

As a result, the Sportback e-tron sticks to the road very nicely indeed, and flinging it around corners – as we did briefly at the Melbourne International Karting Complex – can be immensely satisfying.

All good under the hood

Looking at the e-tron's drivetrain, you'll find a 1.4 TFSI engine with 110 kW, a 75 kW electric motor and a new six-speed S tronic dual-clutch gearbox with an integrated electric motor.

Range limitation is a common concern when it comes to electric vehicles, but Audi's new hybrid has a full-electric range of 50km and a combined range of up to 940km. Getting stranded is not something you'll need to worry about.

The asking price of $60,000 certainly isn't cheap, but there is always a cost to being an early adopter.

Those willing to make a purchase will enjoy the installation of a dedicated 240-volt, high-output 16-amp single-phase power outlet. This will charge the e-tron's battery in 2.5 hours, but you might want to consider where you're going to have it installed.

Anyone living in a garage-less terrace may want to consider buying a regular A3 instead.