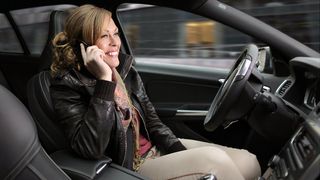 Would you like to be able to do this without dying or being arrested? Better call Volvo…

We reported yesterday that Volvo had a self-driving announcement up its sleeve. Now it's out in the open, following an only mildly tech-issue-plagued online press conference.

Come 2016, the Gothenburg-based car manufacturer will be embarking on a consumer test of its self-driving car concepts, by inviting 100 customers to experience the service – essentially by not driving its cars – as part of their "Drive Me" promotion.

Obviously, though, there will be qualifying criteria. You have to live near Gothenburg, which is where the trial is taking place and live and/or work along the AD route around the city. So that's probably you out, sir.

Qualifying drivers will then be able to test a 50km stretch in Gothenburg while sending texts, uploading carefree selfies or just two-palmed thigh drumming along to Roxette or Europe. You'll be leasing your motor, mind you. It's not your birthday.

The Swedes are a cautious lot, so it's just motorway driving for now, but they are confident that their vehicles will drive safely and securely in all weather and road conditions, something their rival manufacturers have been suspiciously quiet about. And it's quite a thing to put ordinary members of the public in their self-driving cars with no nannying or hand holding. We'd love to see the disclaimer they'll probably have to sign, though.

In an online Q&A session, Volvo's technical expert Henrik Lind discussed the technology the cars will be using: "In the forward view beside radars the Drive Me cars additionally have triple cameras and a laser scanner allowing detection of objects both on long and short range. Supplementary to above sensors a four surround view camera sensor mounted on each side of the vehicle is monitoring the close range around the car for pedestrians, lane marks and vehicles. For short range in low speed we also use 12 ultrasonic sensors."

Currently being tested in S60 and V60 models, if successful, the technology will be rolling out to Volvo's handsome XC90 SUVs a year later, with Director Government Affairs Karl-Johan Runnberg waxing lyrical during the chat about the benefits: "We aim to have the first XC90 cars available to customers in 2017. The main societal benefits are increased safety, reduced fuel consumption, improved mobility and the technology also opens up for new possibilities when it comes urban planning and more efficient infrastructure. For the customers, the main benefit will be the possibility to use their time and do other things in the car when the vehicle takes over control of the drive."

If the driver is incapacitated for any reason, the car will bring itself to a safe place to stop, claims Volvo, and the tech dots are joined by an on board processing system, alongside precise positioning based on GPS and a high definition 3D digital map that is continuously updated with "real-time" data, pinpointing the car's location down to centimetres. This is reliable enough, they claim, to work without requiring driver supervision or input.

The sensors can see over 150m of the road in front, and can even read road signs and sense the road's curvature. Although, Sweden being Sweden, questions about avoiding pot holes couldn't be answered as there simply aren't any in the qualifying area.

And how much will all this safety tech cost? Runnberg again: "The price tag is not yet set, but we do not foresee the price to be higher than for today's driver support/active safety system packages."

And, whichever way you look at it, not dying in your car has all sorts of benefits.