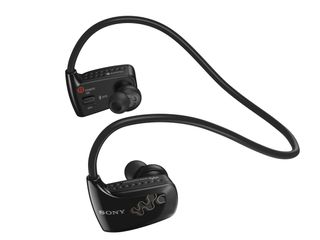 Sony has unveiled its latest Walkman, the Sony NWZ-W260, a wireless MP3 playing headset intended for athletes and the very forgetful, seeing as it can go with you into your post-workout shower.

Well, it can, says Sony's press release, but it probably shouldn't given that the headset shouldn't be immersed or come into continuous contact with water, or shampoo, conditioner, face wash and soap. So… the shower is probably best avoided.

The all-in-one Walkman comes with Zappin song search for aurally browsing music libraries by previewing each track rather than squinting at a tiny screen – which is just as well, because there isn't one.

A three-minute charge can provide enough power for an hour's worth of listening, and you can get up to eight hours of music out of a fully charged battery – that's not quite enough for an ultramarathon, but should see regular marathon runners right.

The headsets come in gloss white or black and with the seal of approval from sprint athlete Marlon Devonish who Sony is also sponsoring at the Olympics next year.

"The Sports Walkman keeps me going through all of my workouts in preparation for the 2012 Olympic Games," he said.

"The sound is amazingly clear and helps get me 'in the zone' when I'm training, and I love that it's both wireless and water-resistant so I never interrupt a training session."

Good to know, because it was the fact that our training sessions were forever interrupted by rogue wires and iPods getting wet that put an end to TechRadar's Olympic dreams.

The Sony Walkman NWZ-W260 UK release date is set for the end of July, no word yet on pricing.