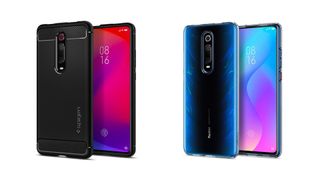 POCO F2 (also called POCOPHONE F2), the alleged successor to one of the most popular smartphones from 2018 the POCO F1, has finally made its presence felt. The much-awaited phone has compatible rugged armor and transparent case listed on the Spigen website. The popular case maker is selling two cases for the alleged POCO F2, POCO F2 Pro priced at $19.99 and $24.99.

The folks first spotted this over at 91Mobiles, who reported that Xiaomi might launch the sequel to the POCO F1 soon. Looking closely at the pictures that are available on the Spigen website, the phone in question eerily resembles Xiaomi's Redmi K20 series, with a pop-up camera and all.

The pictures reveal a triple camera setup on the back with a red/white accented camera module. All of the other design elements look similar to the Redmi K20 phones. It could mean that the POCO F2 and POCO F2 Pro are rebranded versions of the Redmi K20 series, though we hope that the company sticks to the price point that made the first POCO phone so popular.

For all its advantages and disadvantages, the POCO F1 was one of the cheapest Snapdragon 845 powered phones at the time of its launch in August 2018. So, if Xiaomi has planned a sequel, we hope that it's powered by this year's flagship processor, the Snapdragon 855. Even though the SD 855 Plus is out, it would only make the phone tad a bit pricier. Having said that, Spigen's website notes the existence of POCO F2 Pro as well.

The product listing states that the cases are compatible with Xiaomi Pocophone F2 / Pocophone F2 Pro / Mi 9T / Mi 9T Pro / Redmi K20 / Redmi K20 Pro. It could also be a glitch from their end, which is why we shouldn't be reading too much in between the lines.

At the time of the launch of the Redmi K20 series, it was rumored that Xiaomi had done away with the POCO brand. The company executives have often said at press briefings that their POCO sub-brand has its dedicated team of people. It hasn't revealed anything other than this, and over time, the phone has transformed into cult status with fans waiting for the second generation POCOPHONE. It looks like its finally time, and with Realme gearing up to bring X2 Pro in India soon, we think the timing could not be better.