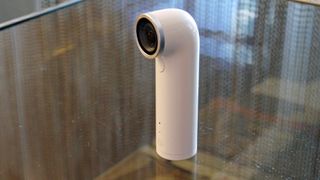 Good for you, not for me

The HTC Re camera, at first glance, seems like a quirky niche camera. Why do we need a separate camera with no viewfinder or display to do what our phones can already do? And why would anyone want to pay $200 for it?

If you're unfamiliar with the HTC Re, it's basically an inhaler/periscope shaped camera that you can easily hold in one hand. It's unobtrusive, small and lightweight so that it can be easily carried around or stowed in your pockets or purse. It records video, takes photos and can even do slow-motion capture and time lapses.

Because there is no viewfinder or digital display like most other cameras, it has to be connected to a smartphone or tablet via Wi-Fi connect.

With that out of the way, let's talk about the benefits of this thing and who it's for. First, its size and shape make it very portable and easy to use. Sometimes, holding your phone or tablet up to shoot video or photos can be precarious, and I've seen many people drop their devices doing this. As an aside, I'd much rather see people using this small, handheld camera at concerts and events rather than obscuring my view with their big phones and tablets!

Additionally, the HTC Re gives you more megapixels than most smartphones, and while resolution isn't everything, it still counts when you're trying to show off big, detailed photos.

Take it anywhere and everywhere

Your ability to control the HTC Re from your smartphone is also an excellent feature - well, it's more like a necessity. But having that ability means you can put the Re just about anywhere you can reach and record videos and photos from vantage points where you might not want to leave your smartphone.

With that in mind, you'll also be able to put the HTC Re anywhere you wouldn't want to attach a smartphone, like your bike, skateboard or arm while you run, skate or surf. Speaking of surf, another bonus for the Re is that it's waterproof.

Is it a GoPro Hero 4 with 4K video recording? No. But it also doesn't cost over $300, either. The HTC Re is for the casual visual artist or maybe even just mom and dad that wants to capture everything from big events to the minutiae of daily life with a little more flexibility than a smartphone, but less costly than the alternatives.

If it has all these benefits and it's so great, why isn't it for me? Well, I don't shoot a lot of video, nor do I take a lot of photos with my mobile devices these days. I have three full-frame DSLRs an excellent APS-C mirrorless camera that takes kinds of photos and videos I want to take. I'd never consider live broadcasting anything or recording short videos of my life to share with everyone.

But just because it's not my style doesn't mean I'd advise everyone to pass on the HTC Re. If you're the type of person that wants easy, and maybe inconspicuous methods of recording and sharing photos and videos from your daily life, and you don't need the best optics and image quality in the world, the Re is great place to start.