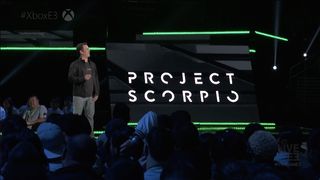 When Microsoft took to the stage at this year's E3 it announced not one but two new consoles: the Xbox One S, which went on sale earlier this year, and Project Scorpio, which will enable gaming at native resolutions up to 4K when it hits store shelves in 2017.

Microsoft's announcements were a first for the industry. Usually throughout the course of a generation, processing power stays consistent, and will only see one big upgrade every six years.

We sat down with Microsoft's Albert Pinello to discuss Project Scorpio, and its impact upon the concept of the console generation.

The 'most powerful console'

Microsoft made headlines when it announced that Project Scorpio was the "most powerful console ever created", and with 6 TFLOPS of computing performance it certainly feels as though there's a certain amount of truth to its words.

The headline feature of the new console is resolution.

"The number we've picked, the 6 TFLOPS, the memory bandwidth, was designed for us to be able to let developers of existing Xbox One games to take their engines and run them at 4K," said Pinello. "Native, true, 4K resolutions, and that was our internal benchmark for picking the specs that we chose for Project Scorpio."

But Pinello was quick to explain that the eventual resolution games will run at will be in the hands of developers.

"I think we've said from the beginning that it's really going to be up to the game developers," he said. "Game developers will choose to take that 6 TFLOPS and do what they think is best for their visions for the game ... if somebody wants to make a 1080p game and make it the most amazing looking game of all time on Scorpio? Great, I think that sounds fantastic!

"We're going to give game developers a canvas to get a level of performance that they haven't been able to achieve on consoles before, and I think the game developers will figure out what makes sense for their customers and the experience they're trying to build."

With such a massive leap in performance it would be tempting to call Project Scorpio the next generation of Xbox, but that's a sentiment Microsoft is trying to avoid.

According to Pinello, "Scorpio is part of the Xbox One family ... all of your games and accessories will work. Your existing games will run better on Scorpio, and ... we didn't want to leave gamers behind."

This "focus on continuity" is what prevents Project Scorpio from being a fully-fledged Xbox Two. Every Xbox One game will play on both the original Xbox One and the Scorpio, and it will be the same disc for both. "When they plug it [the game disc] into an Xbox One S it will play an Xbox One S performance, and when they put it in a Scorpio it will play at Scorpio performance. I don't foresee a world where there's two different discs at retail."

So while the Scorpio might offer a generational leap in performance, it remains firmly in the same generation as the Xbox One.

But what does this mean for the future of the games console? Is this generation a one-off, or will we see this model replace console generations entirely? I asked Pinello whether he thinks the console market is going to emulate the mobile phone hardware cycle.

"Usage models are different, financing is different ... I don't think we want to get the expectation of, like, 'every year there's these very minor changes and we just inundate the market.' We've gotta figure out how this makes sense for console gamers, and respect what makes console gaming great as we go through this transition."

The differences between the mobile phone market and the console market are acute. One tends to see consumers purchase their devices in monthly installments, and tends to market its devices based on features rather than raw processing power ... and the other is the console market.

But it's interesting that Pinello is wary of tiring out consumers, when Microsoft itself is releasing two consoles in two years. That said, the Microsoft executive is hopeful that the company can avoid misleading consumers by giving them as much information up front.

"We wanted to let people know in advance so that we didn't run into the opposite problem which is next year we announce Scorpio and we have people that bought Xbox One S and went 'Why didn't you tell me this was coming a year later? I would have waited.'

"I'm glad we give people that option, to figure out what makes sense for them, what's important to them. I think we have a great product [in the Xbox One S]...I'm very confident in that product and the value that it delivers, and I'm glad we told people that something else was coming next year, and to give people the opportunity to wait if they think it's going to be better for them.

"I think we've given them enough information that they can understand what's coming."

So it seems that not even Microsoft knows for sure where the console market is heading. The adoption of 4K has happened remarkably quickly, necessitating the need for upgrades to console hardware that the traditional console cycle can't provide.

But whether this need remains after the switch to 4K remains to be seen. Certainly the rate of growth in processing power is nowhere near the levels it was just five years ago, leading many to declare that Moore's Law is dying if not dead.

Ultimately it's not clear whether the PS4 Pro and Project Scorpio are one-off flukes, or whether they represent a new console paradigm. From speaking to Microsoft it seems as though even their team isn't sure, and that the focus at the moment is to launch Project Scorpio without upsetting the rest of the Xbox One family and its customers.

We'll just have to wait and see whether it manages to achieve that without upsetting everyone who's already invested in an Xbox One.