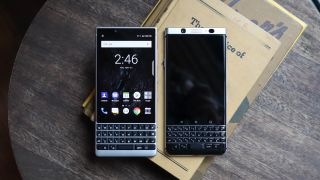 BlackBerry’s new BlackBerry Key2 is the successor to last year’s KeyOne. Yes, BlackBerry is still making phones, but these days they’re running on Android and pulling in a handful of BlackBerry’s security features.

A quick look at both phones, and it’s clear they’re BlackBerry handsets. Full QWERTY keyboards leave little room for doubt. But, as BlackBerry aims to please faithful users who want a secure smartphone with a physical keyboard, its ability to compete with the likes of the Galaxy S9 or iPhone 8 is diminished. The result: the best phone to compare the new BlackBerry Key2 to is last year’s BlackBerry KeyOne.

Here we’ll take a look at what’s changed in the design, hardware, software, and more between the two smartphones.

The BlackBerry KeyOne combines an aluminum frame with a leather-like soft grip on the back and a unique front housing a typical smartphone screen above a physical QWERTY keyboard. The keyboard has glossy keys that are individually backlit, and a fingerprint scanner resides in the Space key.

The right side of the phone is home to the volume and power buttons, while the left side has an awkwardly placed ‘Convenience’ button that serves as a shortcut for launching apps. There are two speaker grilles at the bottom, though only one is an actual speaker, and they’re on either side of a USB 3.1 Type-C port. There’s a 3.5mm headphone jack at the top of the phone, as well as one camera on the front and another in the top corner on the back.

The phone measures 149.3 x 72.5 x 9.4mm and weighs in at 180g. BlackBerry doesn’t specify whether the screen is made of Gorilla Glass or not, but does describe it as being resistant to impact and scratching. No ingress protection rating is mentioned, so the BlackBerry KeyOne should stay away from water.

Not much changes with the move the BlackBerry Key2, at least at first glance. It still has an aluminum frame, with a touchscreen and keyboard on front and a plastic rear. Measuring in at 151.4 x 71.8 x 8.5mm and 168g, it’s a little learner than the KeyOne. And, the rear has a dual-sensor camera this time.

BlackBerry has refined the design a bit, with a sleeker, more modern look, even if it still has bezels and no notch. The BlackBerry Key2 keyboard uses a matte plastic with flatter keycaps, and each key is still backlit. The fingerprint scanner is also still in the space key. The Convenience key has handily moved to the right side of the phone with the power and volume buttons.

BlackBerry has also added a new key to the Key2: the Speed Key, which allows users to create two-key shortcuts to launch apps even while other apps are in the foreground (a key difference from the KeyOne’s keyboard shortcuts).

The Key2 still has a Type-C port, but it’s oddly only USB 3.0. The 3.5mm headphone jack is still included, as are the two speaker grilles (though still unclear if they’re stereo this time). Once again, there’s no ingress protection rating. And, though BlackBerry says the Key2 uses Gorilla Glass, the version of Gorilla Glass is unspecified.

All in all, the BlackBerry Key2 makes minor improvements over its predecessors design, with no substantial leaps ahead.

Because of the physical keyboard, both the BlackBerry KeyOne and Key2 buck the all-screen  display trend. And, there’s really no difference between the two here. Both offer a 4.5-inch IPS LCD touchscreen display with a resolution of 1,620 x 1,080. That makes for a 3:2 aspect ratio, which can be somewhat awkward for media viewing.

Though the resolution isn’t high, imagery will still fairly sharp at this screen size. The pixel density on each is 433ppi.

Neither phone is going to win any awards for their displays, but this is a business phone, anyway.

The BlackBerry KeyOne run Android 7.1 Nougat out of the box (an Oreo upgrade is expected) on a Snapdragon 625 chipset with an octa-core processor clocked at 2.0GHz. It comes in a 3GB RAM/32GB ROM and a 4GB RAM/64GB ROM flavor, but can expand its storage with microSD cards up to 256GB in size.

Powering the phone is a 3,505mAh battery that gave it a nice day-and-a-half battery life in our testing. That battery can charge up to 50% in 36 minutes as well. The KeyOne supports Bluetooth 4.2 LE and EDR, as well as NFC connections. For Wi-Fi, it can connect to 2.4GHz and 5GHz networks.

The BlackBerry Key2 mostly upgrades all of these aspects. It steps up the OS to Android 8.1 Oreo with Android P on its way. The chipset is bumped up to a Snapdragon 660, and it will come with 6GB of RAM and either 64GB or 128GB of storage. Once again, that storage is expandable by microSD up to 256GB.

The Key2 comes with a marginally smaller 3,500mAh battery featuring Quick Charge 3.0. It still has NFC and 2.4/5GHz Wi-Fi support, but steps up to Bluetooth 5.0 LE.

Essentially, the BlackBerry Key2 should prove a more capable performer with improved software and hardware.

The camera is where some of the most dramatic differences appear. BlackBerry’s KeyOne has a 12MP sensor on the back which features large 1.55 micrometer pixels and f/2.0 aperture for a little extra performance in lower light conditions. It can record 4K video at 30fps and has electronic image stabilization (EIS) that’s decent but not up to par with other flagships optical image stabilization (OIS).

The KeyOne’s front camera is an 8MP shooter with an 84-degree field of view. And, it can shoot 1080p video at 30fps. It also has image and video stabilization, but BlackBerry doesn’t specify what kind.

The Key2 should make some modest improvements in the camera department. It has a dual-12MP setup on the rear. One camera has an f/1.8 aperture with 1.28 micrometer pixels for good low-light performance (though we’ll have to see how well it holds up in the real world). The second camera has an f/2.6 aperture and 1.0 micrometer pixels, but it offers optical zoom. It can record 4K video at 30fps

The front camera doesn’t seem to have changed much, with an 8MP sensor that can shoot 1080p video at 30fps. BlackBerry hasn’t mentioned anything about image stabilization systems for the Key2 though, which does raise some concern.

Our hunch is that the BlackBerry Key2 cameras will prove to be a step up, but at this point, it’s hard to be sure.

The BlackBerry KeyOne launched at $549 (£499, AU$729), which was a price that made sense for a mid-tier niche it was carving out. Given its age, that full price feels a bit high, and plenty of discounts should be available.

The Key2, though not quite spec’d like a Samsung or Apple flagship phone, is priced like a high-end handset. At $649 (£579, around AU$1015), it’s a head above the KeyOne’s price. Of course, with plenty of other flagships raising their base price above $700, the Key2 isn’t outrageously priced.

Neither phone is cheap, but the KeyOne is going to have a much more palatable price for anyone shopping on a budget.

The BlackBerry Key2 looks like a step forward for the company, improving on many aspects of the KeyOne. The design is refined, the internals improved, and it still has a physical keyboard. But, both phones still seat themselves pretty well in the upper end of the mid-tier smartphone category.

And, despite the clear upgrades to the Key2, a lot of question marks about the phone have been left unanswered. Is the dual-sensor camera really going to perform better? Is there any form of EIS or OIS? If the KeyOne hasn’t gotten Android Oreo by now, how long will customers have to wait for the Key2 to get Android P? Are early Key2 models going to have screens that pop out like the early KeyOne models did? What version of Gorilla Glass is used?

Until BlackBerry answers these questions, it’s hard to be sure that the Key2 is the best BlackBerry has to offer. And, if it’s better than the KeyOne in most ways, there’s a good case to be made for fans buying the older smartphone instead.