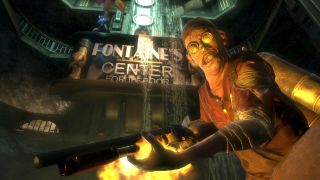 Although not as widely-discussed as the other entries, BioShock 2 is perhaps the most intricate and fascinating of the BioShock series thus far, presenting a nuanced, sociological take on Rapture and its continued deterioration.

Born out of lofty expectations and a tight schedule, BioShock 2's aspirations are best exemplified by its multiplayer, 'Fall of Rapture', which depicted the city's downfall as a violent, unending, all-against-all civil war.

To celebrate the tenth anniversary of BioShock 2, we spoke with the game’s creative director, Jordan Thomas, and lead designer, Allen Goode, about the intricacies of creating its multiplayer spin-off.

“[BioShock 2] focused on the little people in Rapture,” Jordan Thomas, creative director on BioShock 2, tells TechRadar. “The previous game was all about grand ideas and big powerful men, and a few women, making sweeping gestures and throwing their brows, and the second game was very much about smaller stories and more intimate relationships.”

Purpose-hired for a new BioShock, Thomas and 2K Marin's voyage down to Andrew Ryan's fallen kingdom came with a three-part mandate: a multiplayer mode (to justify the $60 price-tag), a PlayStation 3 port of the first game, and a two-and-half-year time-frame. Thankfully, the team was given extra resources from 2K Boston, 2K Australia, and Digital Extremes, the latter of whom took lead on non-single-player content.

Having co-developed popular multiplayer FPS Unreal with Epic Games since the nineties, Digital Extremes was a perfect fit that understood what was required from multiplayer, and how to keep it manageable.

“There were more MMO-like proposals, or more ecosystem, self-contained and perpetual, much less match-oriented ideas. Digital Extremes wisely pushed back on that,” Thomas says. “They had shipped many games before, in their time, more than we had, and they said 'OK, I'm sorry, two years?', and decided to propose something more reasonable.”

The fall of Rapture

On its face, 'Fall of Rapture' is a standard PvP shooter following Rapture's heightened period dress-code. It’s packed with ‘50s-inspired weapons and retro-punk machinery, as well as BioShock’s trademark plasmids, tonics, and a selection of match-types including deathmatch and capture-the-flag. But what lies beneath is something of genuine depth, not least in the hefty re-balance that was needed to rework what was always meant as a single-player experience.

“Running around shooting your Tommy Gun only to be hit by a Winter Blast plasmid and completely stopped in your tracks, and eventually killed, was not a fun experience,” Allen Goode, systems designer and lead designer on BioShock 2, tells us. “We had to look into how these mechanics could work in multiplayer while retaining their identities.”

Playing as a citizen of Rapture right as the civil war boils over, your personal apartment acts as a central hub within the mode, where a message from Andrew Ryan tells you “Rapture is yours”, and your strength will be what “rebuilds the city”.

Audio logs deliver each characters' back-story, and your corporate friends at Sinclair Solutions provide your plasmids, free prototypes of what's in the main games, as you enter the fray. There's Little Sisters and playable Big Daddies – an early version had nine players battling one as a Big Daddy but was scrapped due to balancing issues - and a roster of 11 splicers to choose from, each with their own unique background that led them to the underwater utopia. The cast were designed over a period of months to find the exact harmony between acknowledging their humanity and making it clear they were now murderous psychopaths.

“The hardest part was to let the playable characters feel like they were denizens of Rapture, but still be even the ghost of aspirational,” Thomas explains. “Often the reason that people will play a domination-oriented multiplayer experience is that they're trying to express some part of themselves that they wish was more powerful or more interesting or sexier. And so, to force that into a splicer costume was the work of some months.”

It's not all serious

A satirical through-line has always permeated BioShock's grimy mix of body horror and Randian politics, and furthering that balance of legitimate horror with a sense of levity from the original into its follow-up, and ‘Fall of Rapture’, was no easy task.

Jordan mentions that he and co-writer Daniel Manley were wary of comparisons to Bethesda's Fallout 3, leading them and Digital Extremes to further exaggerate the propaganda and messaging that comes from the in-game corporations.

“All of Sinclair Solutions’ communications with the player come off as over-the-top marketing designed to make the player feel like the customer rather than a pawn,” Goode says. “By embracing dark comedy, we could explore this subject matter in a way that was engaging for our audience but still poignant. In the end, the player experiences how corporate greed and self-interest created the first splicers in Rapture.”

Let's go back to the beginning

Being a prequel allowed Digital Extremes to work independently on the nuts-and-bolts development, reusing many locations and visuals from the first game as 2K Marin designed new assets for the second. The studio was able to flesh out the overall story through more subtle means, leaving secrets and titbits for the player-base to uncover.

“We had the opportunity to show what Fort Frolic, Arcadia, Neptune’s Bounty, and many more looked like before the events of BioShock. They were still pretty wrecked but not completely disheveled,” Goode explains. “Every room has a story to tell, even in multiplayer. There are clues in every map to what life was like for the people of Rapture before its fall.”

Despite strong reviews and sales in excess of two-and-a-half million, BioShock 2 was deemed a failure by 2K parent company Take-Two Interactive, and Jordan's team was dissolved. The game has since developed a cult following thanks to 2016's BioShock: The Collection, which remastered all three BioShock games, and their DLC, for modern hardware. Unfortunately, Fall of Rapture was excluded from the re-release, leaving it only accessible through Xbox 360, PlayStation 3, or the non-remastered version on Steam.

Standing the test of time

A decade on, Jordan remains proud of what 2K Marin and their comrades achieved, especially given the pressurized environment. The project launched him and many of his team-members' careers, where he’s now lead writer of online survival horror The Blackout Club.

As a new BioShock looms, featuring several higher-ups from his tenure, he has some thoughts on what the next instalment could do to stand-out, starting with a deliberate change of setting.

“I wouldn't want to rehash the big-city-goes-bad thing, exactly. At some point you have to stop rubber-stamping that,” he says. “I would, I think, turn to the mind. My interest would be to take it away from pure combat. I would love the 'Tourist Mode' that people often talk about to be prominent. Violence as punctuation, not the entire sentence.”