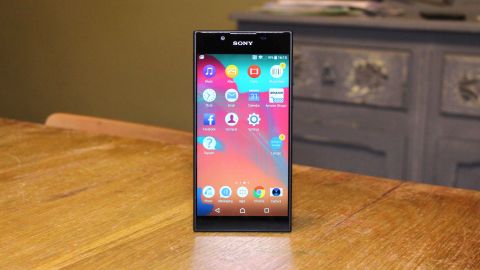 The Xperia L1 is running Android Nougat with Sony's custom skin placed on top. For the most part, Sony's UI retains many Android hallmarks such as the app drawer, pull-down notification shade and even Google Now, which sits to the left of your main home screen.

Many other handset makers customize these elements or strip them out entirely, so it's refreshing to see Sony retain them. However, on the other hand, the company has supplanted some pretty key Google applications with its own variants, and unless you're a lifelong Sony supporter, this duplication won't be welcome.

It's easy enough to make sure Google's options are the default ones, but company's like Sony really need to get their heads around the fact that there's little reason to compete with Google in these areas, especially when its apps are normally so superior anyway.

The Xperia L1 also comes with Swiftkey installed by default instead of Google's own keyboard, but you can swap this out for your own preferred input method too.

That 5.5-inch screen is large enough for portable movie watching, but the low resolution means you're not getting a full HD image. Poor contrast is also an issue, and during dark scenes things something look more grey than black.

Colors are generally good though and if you're not too demanding the Xperia L1 is more than adequate for your mobile cinematic needs.

The Xperia L1 may only possess a single speaker, but when you enable the special 'xLOUD' setting it really sings; music sounds impressive when played this way, with minimal distortion and excellent tone and bass.

Those around you may not appreciate your song choices however, so you can always use the 3.5mm headphone socket – yes, Sony has decided that wired connections are still hip and happening in 2018.

The Xperia L1 comes with its own music application which allows you to pull tracks from your Google Drive account – handy – but we ignored it in favor of Google Play Music, which gives you the chance to store your own music tracks in the cloud for free.

While the 720p screen gives the MediaTek-made CPU and Mali GPU less pixels to push around, games run rather inconsistently on the Xperia L1. Real Racing 3 – a visually intense 3D racer – is playable but quite jerky in places, especially when there are a lot of cars on-screen at once.

This is to be expected – some top-tier Android phones struggle to run it smoothly, after all – but what's puzzling is that the Xperia L1 is equally skittish when it comes to less demanding 2D games, which should suggest that cheap-and-cheerful chipset is to blame.

With a MediaTek MT6737T quad-core 1.45GHz chipset under the hood, the Xperia L1 can hardly be described as a mobile heavyweight. This is a low-cost CPU twinned with a Mali-T720MP2 GPU and 2GB of RAM – bargain-basement stuff, in summary.

The AnTuTu benchmark gives the Xperia L1 a ranking of 36,210, while Geekbench awards it a single-core score of 662 and a multi-core score of 1,813.

Those aren't groundbreaking figures by any means, coming in well-below the 2,377 multi-core score achieved by the Moto G5 for example. This gives you a clear indication of just how weak the internal tech of the Xperia L1 is.

However, Sony's phone is far from the only low-cost Android handset to use MediaTek's silicon, and it's important to remember we're not in the realm of £800/$900 smartphones here.

Current page: Anything else I should know?