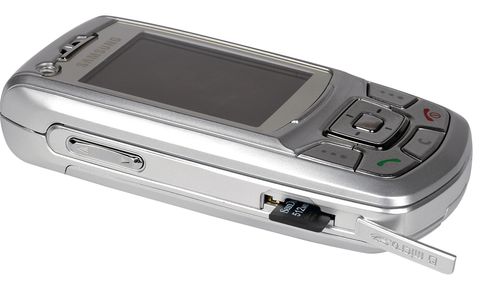 An excellent combination of size, looks and features

Samsung has produced a breathtaking spread of phones over the last couple of years. But out of all the various designs that the Korean giant has unleashed, two have been particularly memorable.

The D500 and its successor, the D600, were - in fact, still are - highly-desirable mid-market handsets. Produced in an all-black casing, and given that frisson of cool through the use of a semi-automatic slide-open mechanism.

The pair do enough to attract the executive user as well as the gadget freak. The new Z400, though, offers something neither of these models has - 3G.

Sure, like the D600, it offers a 2-megapixel camera and an MP3 player with an expandable memory, and it also does the business with document readers that can read all sorts of files that come attached to emails.

Now, though, with the Z400 Samsung has supercharged the slider concept by adding the highspeed multimedia capabilities that third generation devices are capable of - including video calling, high speed video and audio downloads and streaming.

Samsung, so far, has concentrated mainly on producing clamshell handsets for the burgeoning 3G market. The Z400 is not quite the first Samsung with a slip-open casing: the Z320i sold exclusively in this country by O2 offers a unique combination of 3G and i-mode operability. But this is a handset that everyone should sit up and take notice of...

Samsung has decided (initially at least) to deliver the Z400 in chrome rather than black, to differentiate it from the D600. Remarkably, the Z600 is actually slightly lighter and slimmer than its GSM predecessor.

The large 320x240-pixel display gets put to full use in the slider design, being permanently on view, and can be used to provide access to every piece of information, download and file that the phone presents you.

When it comes to viewing streamed videos and so on, the size and quality of the screen is essential to the viewing experience. Software makes good use of the available space on occasion; when you use the video conferencing facility, you get a good sized preview of yourself as you dial.

This shrinks vision-mixer-style to a corner when your call is actually answered, so you can see the incoming picture clearly. The space is not used so well when watching videos or Mobile TV - there is no way to blow up the picture so that it fills the full LCD area; instead you get an image that occupies only the central 65 per cent of the display.

Furthermore, there is no one-touch button for placing a video call - so you are required to delve into the menu options to use this.

You do get a button on the side of the phone that offers quick access to a number of onboard application - and this proves particularly useful when using the phone without going to the trouble of revealing the full numberpad.

There is also a fastkey for the camera, although with this the slider is best opened, otherwise you can only use the VGA resolution secondary camera, which is primarily designed for videoconferencing.

Samsung has developed a great reputation for its onboard digital cameras. And with a maximum resolution of 2 megapixels from the main lens, the Z400 carries on with the tradition. To be fair to other manufacturers, the camera is no longer state-of-the-art in terms of resolution or facilities; there is no flash, let alone autofocus mechanism or macro mode.

But it provides a good range of creative overrides all the same. A variable ISO sensitivity for the sensor, for instance, means that you get better lowlight performance than with some handsets - although you should expect some colour noise in the images when the signal is amplified in this way.

Putting the gadgetry into practice, the camera gives a fair-to-good performance. Colour balance and saturation are all attractive, and exposure is up to the mark. The lack of close focusing facilities mean that detail on near subjects leaves something to be desired - and we found some evidence of blown highlights.

Musical performance is also something of a mixed bag. The inbuilt MP3 player can be controlled with the external joypad buttons. But although the headset connects through the same multipin connector as used to charge the phone, you can use this device with a pair of stereo Bluetooth headphones.

The supplied earbuds only give average performance - there's a lack of ear-tingling dynamic range, with not enough bass depth. There is no equalizer facility or tone controls to tweak the sound. However, detailing is still reasonable, and there is no distortion. What's more, with the easily accessible hot-swappable card slot you have plenty of potential for loading your favourite albums.

The really clever bit about this phone is that it practically offers the spec of a smartphone without being one. Sure, you can't add your own applications in the same way as the Nokia Symbian S60 3G handsets. But the Samsung solution is much smaller, and you don't miss out on much.

This is particularly so because of the continued provision of the Picsel document viewer. Word, Excel, Powerpoint and Acrobat files can all be read on the move.

Sure, the screen is not a great size for viewing that report someone has emailed you, but the fact that the volume control rocker doubles as a zoom control means that moving around the pages, in combination with the joypad, is nowhere near as painful as it might have been.

Even the games impress. Unlike many 3G phones that offer little more than demos of games you then have to buy, this comes sporting two full games with good-looking graphics. The inline skating navigation game and the futuristic shoot-em-up are both well worth the trouble to hunt out and fire up.

The rechargeable lithium ion pack managed to last for some 48 hours before needing to be plugged in.

But although this may not sound like a great performance on its own, we have to point out that during this time we had watched an hour of Sky Sports News, streamed across on Vodafone's Mobile TV service - as well as giving the other facilities a good going over. In that context, we were impressed at the running time.

At the time of going to press, we could not be sure which of the networks would definitely be offering the Z400. But undoubtedly its combination of size, simple good looks, and impressive range of features mean that all operators ought to be clambering over themselves to get this model signed up to their 3G handset ranges. Chris George

Video calling: A secondary lens sits on the front of the phone, above the display, for 3G video calling

Memory card: You can boost the onboard memory via a microSD swappable card - a slot is on the side of the phone

Slider mechanism: Very slick and stylish - the phone's keypad is hidden away under the large display