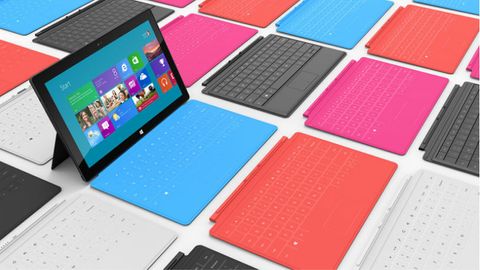 Our in-depth review of the Microsoft Surface tablet

Surface represents a great value tablet that will get stronger with time, so if you're looking for a superb all-round Windows tablet which can double as a work machine, with bags of potential and head-turning appeal, then Surface should be high on your list.

NOTE: This is a review of the 2012 Surface RT - the new Windows 8.1 RT-powered, Nvidia Tegra 4-based Surface 2 is about to replace it. Also check out what we think about the full-fat Surface Pro 2 as well as Windows 8.1.

Microsoft Surface RT was released late in 2012 and was the poster boy for Windows RT, the version of Windows 8 designed for ARM-powered systems. This is a cut-down version of the full Windows 8 operating system.

That means you can only use new Windows apps from the Windows Store. There is NO support for desktop apps such as iTunes, Photoshop, VLC, Filezilla and more, although the desktop is still there for use with the integrated Microsoft Office 2013 apps.

If you need full desktop app support but like the Surface design, there's also an Intel version of Surface running Windows 8 Pro and called Surface Pro.

Other Windows RT tablets and hybrids have been available, including the Asus Vivo Tab RT, Lenovo Ideapad Yoga 11 (though that was replaced with the Intel-powered Yoga 11S), and Dell XPS 10.

But Windows RT has struggled. Sales have been problematic with most companies withdrawing from the market and Microsoft having to take a $900 million USD write down on unsold Surface RT tablets.

That has led to a price reduction amounting to $150 per model (equal to £98, AU$163) - meaning that providing you want one there's actually never been a better time to buy it. Price reductions also abound because the Surface 2 is coming soon. Microsoft says it is still fully committed to RT, and has even announced a version of the forthcoming Windows 8.1 for RT tablets - check out our Hands on: Windows RT 8.1 review.

The Surface RT boasts a distinctive design, helped by those unmistakable keyboard covers, enjoys a 10.6-inch widescreen display, and runs a version of the most popular operating system on the planet. But there's a crippling caveat which might be its undoing.

Windows RT won't run old PC programs, so any trip to the internet to download legacy programs such as VLC Player, or even big-name offerings like Photoshop Elements, just won't work. For that you need Surface Pro, or any Windows 8 device featuring an Intel processor.

It has the potential to cause mass confusion and the power to sink Microsoft's figurehead before it's even taken off.

On picking up the Surface one single sentiment falls from the mouth of every man, woman or child without fail: "It's thicker than I thought."

That is factually nonsense. At 9.4mm thick, it's exactly the same thickness as the iPad 4, except that instead of masking its true girth with tapered edges, Surface's design looks as if it's been chiseled from a slab of slate.

It's square and boxy, but fresh looking and the magnesium 'VaporMg' coating gives it a cool finish.

At 690g Microsoft Surface is noticeably heavier than its rivals. The iPad 4 weighs 650g due to shedding an inch of screen, but Surface feels richer for the extra space.

The 16:9 screen is suited to Windows, it enables you to multitask apps and 'snap' them literally side by side. It feels like you're using a laptop and that's a big leap towards a genuine hybrid experience.

Of course, the rear kickstand is an iconic part of Surface. It's also made of metal, and does a good job of propping up your tablet - to an angle of 22 degrees - even when on your lap.

However, we'd have liked it to be more adjustable – at the moment it has just one position – and a button release would also be handy as you need nimble fingers to pull out the stand.

It's also larger than the iPad - the screen is a 10.6-inch 1366x768 IPS panel, which falls short of the full HD displays of the Sony VAIO Duo 11 and Asus Taichi, but still looks clear and crisp.

It's not going to win any awards for screen vibrancy, and certainly never going to challenge Retina, but it's good enough - and helps Microsoft keep the price down to a reasonable level.

A keyboard-less 32GB Surface costs £399, the same as an iPad 4 with half the storage.

Under the hood is an Nvidia Tegra 3 processor, with the ARM technology that drives this new Windows RT operating system. It's the same you'll find in high flying Android tablets such as the Asus Transformer Prime and Google Nexus 7. There's also 2GB of RAM.

We'd love to say that it walked through every task that we threw at it, but in all honesty, we feel that Tegra struggles in Windows.

The system felt responsive to navigate but apps lingered on their splash screens for uncomfortable periods, seconds longer than they should.

There was no jerkiness or hangs, just a lethargy that frustrates when you're in a hurry.

We tested the 64GB Microsoft Surface, which offers plenty of storage, and even a Micro SDSX port hidden under the kickstand, which enables you to boost storage by another 64GB.

That makes Surface a great deal when you consider that you can get nearly 100GB of storage for the same price as the 16GB iPad. That's also not including the USB port for connecting USB storage, as well as traditional Windows peripherals.

Being able to plug in a memory stick in is especially refreshing, and makes Surface a genuine alternative to the iPad.

There's currently no 3G option for Surface, and with no dongles compatible with Windows RT at present, that's not an option right now.

Of course, one of the headline features is the Touch Cover, the clip-on keyboard that enables you to use your Surface as either a tablet or laptop. It feels shockingly light, as if it's made of cardboard.

Typing takes some getting used to, and the click sound that's used to denote a successful key press is essential to effective typing, as the lack of tactile feedback can be disorientating.

However, the keys are sensitive and speed typing is certainly possible with a few hours of practice.

What's more, despite the flat keyboard feeling like it's been hewn from old egg boxes, it features a multi-touch trackpad, should you want to use a mouse while in the traditional Windows interface.

The Touch Cover maybe a triumph of design but we would heartily recommend investing in the Type Cover for comfortable typing.

This offers a much more natural typing experience, and is one of the most spacious tablet keyboard accessories we've used.

It's much more comfortable and can easily be used for longer periods, but it does have an annoying flex in the middle, so the keys tend to bounce if you're a heavy typist.

We'd still recommend it, but it will cost you: the Type Cover costs an extra £110, rather than £80 for the Touch Cover.