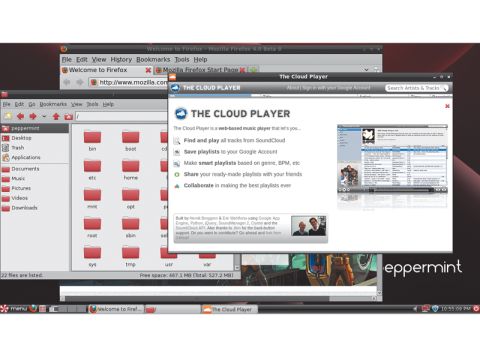 Peppermint is another Ubuntu derivative distribution, in a similar vein to the likes of early CrunchBang and Mint.

It has two unique selling points. The first is speed without feature compromise, as the entire system has been tuned for lightening-fast operation.

This is mostly due to the use of OpenBox for its desktop environment. Its quick user interface doesn't waste time making things look too pretty.

Unlike KDE, you'll find that menus appear instantly, and applications aren't stalled by desktop activities or wobbly window effects. This means you don't get advanced features like native widgets, embedded search or a vast array of desktop widgets, but nor do you have to wade through icons you're never going to use.

This is a distribution for when you want to get work done with the minimum of fuss. Just click on a launch menu and run the tool you want to use.

Apps in the cloud

The second unique selling point is that the desktop tools have been replaced with cloud-facing portals. These run through the Mozilla Foundation's Prism platform, presenting web applications within their own windows.

Office duties are fulfilled by Google's documents in the cloud, for example, and even GIMP has been replaced by Pixlr.com.

When you see the breadth of applications available through a browser presented in this way, you realise how far we've come and what any future desktop may look like. But the obvious downside is that you'll need an internet connection for all of this to make sense.

And the future's also going to be interesting because Prism is no longer being developed. The latter problem will likely be solved with Chrome, especially because it also needs to be solved for Google's own OS. Initial trials are available in Peppermint Ice.

And the first problem will simply be solved in time, because it's not going to be long until we're all connected.