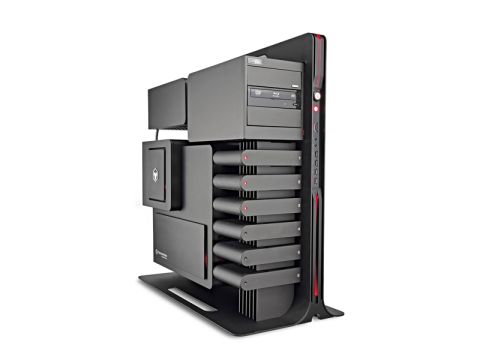 What do you do when you've produced an excellent, sub-£1,000 rig that benches fantastically well for the money and garners awards from the likes of PC Format?

Apparently, you stick the innards into an oversized, over-priced chassis, give it an extra 500GB of storage space, downgrade the graphics card and slap a £200 price premium on it for the pleasure of owning one. Smart move?

Well, if you really want the BMW-designed Level 10 chassis for less than the price of the crazy £5,500 rig we last saw dressed up in this gimp suit then I guess this is for you. Poor, sad, deluded hermit, you…

Essentially, these are the same basic components you saw squeezed into the understated Silverstone chassis in YOYOtech's original Warbird i750, though with a little more space, a chunk less graphical grunt and some added weight on your bank balance.

So what are the benefits to buying this special edition? Just the ThermalTake Level 10 case. That's it.

But this is a £400+ chassis, you may cry, if you haven't yet realised how much we dislike this case. Yes, you are getting the case at a fair discount, but you're also having to put up with sub-par graphics performance for a £1,000 rig.

It still just about delivers acceptable frame rates at the more standard 1,680x1,050 resolution, but at the high-end you lose up to 13fps in Far Cry 2. Personally, when I'm gaming I spend more time looking at my screen than admiring the over-designed chassis surrounding the humming workings of my PC. But hey, that might just be me and there may be many people out there who would prefer an interesting-looking machine than a fast one. (I doubt they read PC Format, though…)

The cynical portion of my mind, which seems to be evergrowing like a bile-filled tumour, would say that maybe YOYOtech didn't sell as many of the Level 10 clad uber-rigs as it was hoping to. And perhaps it's wrapping some of its lower spec rigs in this emperor's new clothing simply to ship spare units.

The Warbird 750 SE does still have that excellent, overclocked i5 750 CPU beating away at its heart. But the lack of supporting GPU eats away at a lot of the performance metrics you throw its way. The lack of OS too becomes more of a worry when you're spending this much on a machine.

At the £800 mark you could just about accept it as a cost-saving device for those with an existing spare copy of Windows, but the £1,000 mark demands a wee bit more.

So unfortunately, this special edition rig just isn't quite as special as the non-special edition. Which is quite an achievement considering the base it had to work from.