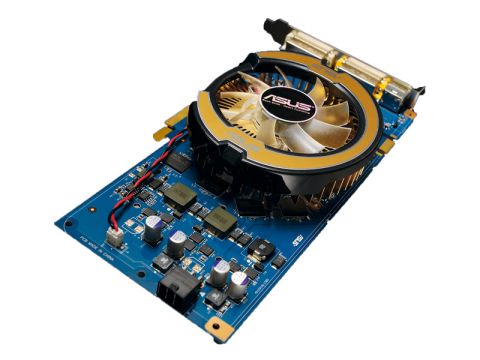 Is it time to put the graphics card equivalent of Old Yeller out of its misery?

It's really not worth saving a tenner. The 9600GT is way cards that cost only a little more

A stock interpretation of NVIDIA's GeForce 9600GT, Asus' card distinguishes itself in two ways. First of all, it's one of the cheapest gamer cards around, which isn't bad for a chip which would have been considered 'mainstream' just a generation ago. Its second claim to fame, though, is that it's also miles behind the other cards around these days. If it were a horse race, the 9600GT is the three legged donkey clearly on its way to the knackers' yard.

The reason it lags compared to the rest though isn't hard to fathom. Although it's true that Nvidia cards do more with fewer shader cores, it has barely a quarter of the stream processors that the higher end GeForces have, and that's a deficit no amount of clock speed is going to make up.

The thing it's easy to overlook, of course, is that even at the highest resolutions we tested at – a 24-inch monitor pleasing 1,920 x 1,200 – the 9600GT almost always put in a playable performance. You wouldn't want to try and run a 30-inch panel off of one, but its more than adequate so long as you don't ramp the resolution up too high and ramp up image quality settings too.

So theoretically, you could stick one of these in a low-cost PC for a non-techie relative, say, and they'd think they were playing on a supercomputer. Or – depending on how things pan out with DirectX11 and if games start using a second GPU for AI routines and so on – perhaps it's worth putting one in your own machine as a second graphics card?

Sadly not. For just £10 more you can bag the far superior ATI Radeon HD4770, which is a whole class above this for the same sort of money. It's time for the 9600GT to retire gracefully from the field.