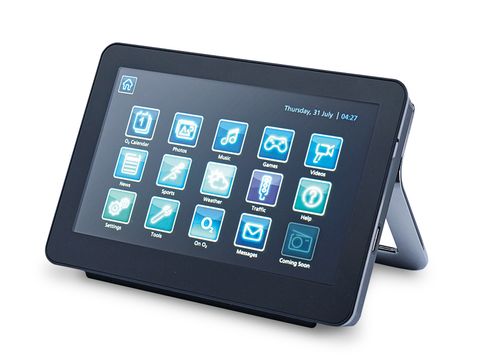 The Joggler at least has a nice black and silver styling

A functional but not very useful piece of kit

According to Wikipedia, 'Joggling' is the sport of running while juggling balls. Look it up, the guy who's 'joggling' looks like he's in tremendous pain. As was I when I turned my attention to O2's Joggler (neat segue - Ed).

The Joggler is basically a giant iPhone that you can't take anywhere. It's meant to sit in your kitchen, and O2 says to think of it 'as your new fridge door.' But it still refused to keep our milk cold.

What O2 is getting at is the Joggler is meant to be a kind of family planning device (no, not that sort). You can send and receive text messages on it. It has a calendar so you can see when your li'l cherub's next piano lesson is and you can use it to access the internet.

When I say the internet, I actually mean the Sky News RSS feed. It's meant to be safe for kids, you see.

Sitting somewhere betwixt a digital photo frame and a woeful netbook, I can see but a couple of situations where the Joggler would come in handy.

If you've got eight sprogs and need to see exactly what they're doing, and when, it might come in handy. It's also useful if you're stalking up to eight women, and need to send them anonymous texts, while keeping a diary of where and when you last saw them alive.

If this was You-and-Your-Eight-Children.com, we might be more tempted to give this a glowing review. Anyone with a vague interest in organising their lives, however, should invest the cash in a low-powered Linux netbook or cheapo all-in-one machine and stick that in the kitchen instead. Fridge door my arse.