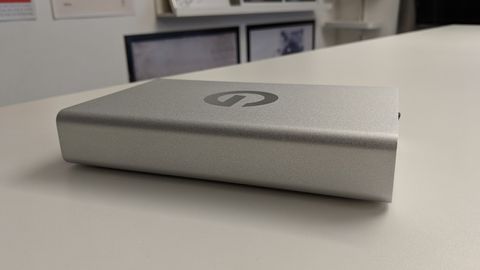 The G-Technology G-Drive 4TB delivers some great read/write speeds with a minimalist design.

The G-Drive is a solid external hard drive that delivers some great read/write speeds at a decent price with a minimalist design.

The G-Technology G-Drive 4TB is one of the most popular external hard drives drives today, and it’s not hard to understand why.

Solid state drives (SSDs) aren’t just all the rage these days. They have all but displaced spinning hard disk drives, as they’re simply better in a lot of ways for most end-user devices. SSDs boast low power consumption, faster performance and shock resistance.

There are ways in which HDDs still rule the roost. SSDs have come a long way as well in terms of cost per unit storage, but they haven’t caught up to the affordability of HDDs. Hard drives are still much more affordable, especially for multi-terabyte capacities.

Affordability aside, is the G-Technology G-Drive 4TB worth it? Well, it delivers some great read/write speeds with a minimalist design. In short, absolutely.

And, with Black Friday and Cyber Monday just around the corner, it might just get cheaper than it’s ever been.

Designed to match the Apple product range, the G-Technology G-Drive external hard disk features an all-aluminum enclosure with an illuminated ‘G’ logo and air vents (to cool the drive) on the front. A large ‘G’ adorns the top of the device and there’s a power switch, a USB Type-C connector (Gen 1 so only up to 5Gbps) and a power socket at the back.

In addition, a wieldy 19V, 3.42A (65W) power supply unit accompanies the device, which is at odds with the minimalist design of the drive. Four rubber feet plus the usual details (serial number, barcode) are located on the base of the device.

The drive can even charge your MacBook or MacBook Pro (or indeed any recent laptops that support Power Delivery).

The G-Drive external drive is plug-and-play on Apple Mac and can be easily reformatted for Windows. It is also Time Machine ready so you will be able to quickly backup all your files.

Pry open this drive and you will find a Western Digital WD40EMRX-82UZ0N0, otherwise known as the WD Red. This is a 4TB hard disk drive spinning at 5400RPM with 64MB cache – a storage device that has been fine-tuned to deliver cooler temperatures in use and targets NAS users.

WD says that its Red range has features such as NAS compatibility, increased reliability, error recovery controls as well as noise and vibration protection that make it a great choice for use cases that require better reliability than your run-of-the-mill hard disk drive.

Not surprisingly, the drive comes with a three-year limited warranty, plus a pair of USB Type-C cables and extra plugs for mainland Europe territories.

As expected the drive warmed up a bit during our testing, but this represented nothing alarming for a storage device that is expected to be powered on 24/7.

There’s plenty of competition out there both from Western Digital – the parent company of G-Technology – and from others, although few can match the level of reliability set by the G-Drive.

There are, for example, plenty of 2.5-inch external hard disk drives that cost about £100 (around $140). However, leaving those to run 24/7 is not advisable because they were not designed from the ground up to work that way.

Western Digital has a 4TB Elements drive for around £100 ($140) and a 4TB WD My Book desktop hard drive, while Seagate-owned LaCie sells a 4TB Porsche Design USB-C drive – that targets the same audience as the G-Drive – and a high performance drive called the D2 that is surprisingly inexpensive.

The G-Drive external HDD shows that spinning hard drives still have their place in an increasingly SSD-centric marketplace. This product hits a good balance between being relatively affordable and suitably capacious.

Although it was launched more than a year ago, the G-Drive is still very much competitive with rivals launched in 2017. It is fast, reasonably well built, compatible with Apple products and has a faster implementation of USB Type-C.

It would be great if G-Technology decided to produce a mini version of this drive (or even simply shrink the current device for a new 2018 offering), and also introduced a 2TB version to compete with Samsung. Making it waterproof would be the icing on the cake but that’s unlikely to happen, mainly because that would put it in direct competition with SanDisk products, another sub-brand of Western Digital.