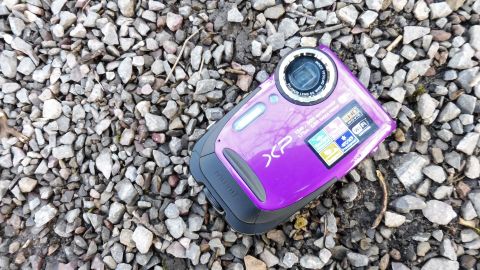 The quality of images from the XP80 depends on the light you're using the camera in. In bright, outdoors light, pictures are bright and punchy – which is good news considering this is probably where you'll be using the camera most of the time.

It's possible to see some image smoothing if you examine an image at 100% but, again, the likelihood of doing that for the majority of your pictures is fairly slim, and they're certainly good enough to be displayed or printed at normal sizes, such as 5x7 inches, or on Facebook.

Shooting in low light is not the camera's forte, though. As you move up through the sensitivity range, you'll see a loss of detail and noise starting to creep in from around ISO 800, and images start to become less usable at ISO 3200 and above unless you're sharing at very small sizes.

Moving on to better news, the camera's metering system does a good job of producing accurate exposures – I hardly had to use exposure compensation at all, except in very high contrast situations. The camera's automatic white balance system is not too bad, producing pretty accurate colours even under artificial lights.

Generally speaking, focus is acquired pretty quickly in autofocus mode – again, especially when shooting in bright light. Things slow down a little when you're underwater, especially in murkier waters. Macro focusing allows you to get reasonably close to the subject for frame-filling shots, and there's also an underwater macro mode which can be useful in helping the camera to focus in more difficult conditions. In practice I found this gave mixed results, though, sometimes focusing, and other times failing.

Images taken at the far end of the 5x optical zoom contain a good amount of detail, and while a 5x optical zoom isn't much to write home about compared with some of the other compacts currently on the market, it covers enough bases to be useful. You can also activate a digital zoom, but I'd avoid that unless you're absolutely desperate to get closer to the subject in question.

There's a decent range of digital filters, with some being more appealing than others (depending on preference). It's worth experimenting with them to see which ones you like, but my favourite is Toy Camera.

A fun and simple camera to use, the XP80 doesn't offer the best image quality on the market for compact cameras, but it's pretty decent for a rugged offering. It's a camera you can (literally) sling in your bag and take on holiday with you. You don't need to treat it with the respect you might a regular compact camera and it will still survive – always a bonus when beaches, kids and water are involved.

One of the biggest limitations of this camera is its inability to make key changes to certain settings, such as shutter speed or aperture, making it less than appealing to more advanced photographers. It also doesn't cope too well in low light.

It is often the case that rugged compact cameras offer a trade off between high image quality and tough credentials and the XP80 pretty much follows that pattern.

While image quality is pretty decent in good light, if you examine pictures close up you'll see a loss of detail, and if you try to use the camera in low light, you may be disappointed with the results.

However, that fact is pretty much made up for by the fact that you can treat it pretty roughly and it will survive. Being able to take it underwater makes it fun to use at the beach and during water sports, while its freeze proofing makes it appealing for lovers of snow sports.

It's also a pretty easy camera to use, leaving you to concentrate on composition rather than changing a myriad of settings – good if you're a beginner, but perhaps a little frustrating to enthusiasts who want to take a little more control over things.