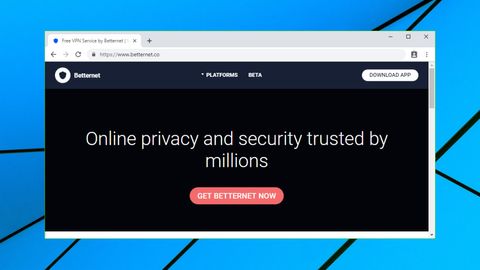 Betternet is quick and works at a basic level, but its privacy issues and lack of features mean it's not a serious VPN.

Betternet is a hugely popular Canadian VPN which claims to have more than 38 million users around the world.

The service is best known for its largely unrestricted free plan. This has no limits on bandwidth, no need to register or hand over your email address, you can just download a client – Windows, Mac, iOS, Android, Firefox or Chrome extension – and start right away.

Too good to be true? Well, maybe. The free version provides US servers only. The clients have no significant features beyond the Connect button, and there's very little support to help out if you run into problems.

The free plan inserts ads into websites, too, perhaps allowing advertisers to find out more you.

Lots of free VPNs use similar ad-related tricks, but a 2016 Australian report on the privacy and security risks of Android VPN apps found that Betternet stood out. The report authors checked each app for embedded tracking libraries and found Betternet had more than anybody else.

If you'd rather not take the risk, you could opt for Betternet's Premium plan. This doesn't include ads, so the concerns about tracking libraries don't apply. It also offers improved performance and more locations across 70 countries, along with 27 cities in the US.

Betternet Premium's one-month pricing seems high at $11.99, but pay for a year upfront and this plummets to an effective $2.99. There's also a welcome bonus in a free seven-day trial, although you must hand over your payment details first (only cards are supported), and if you forget to cancel your subscription, it renews at the most expensive $11.99 a month rate.

Betternet's privacy policy says the company doesn't keep logs of your online activities, or 'associate any domains or applications that you use with you, your device, or email.' That sounds like good news, but it's not the whole story.

The company also says that when you launch its app, 'before you connect to the VPN, we and our service providers collect device-specific information, such as the unique mobile ID, hardware model, operating system version, language, and network information. We may also use, but never log or store, your IP address to derive your approximate (city-level) location. We use this information to provide and improve the Services, troubleshoot, and perform analytics on our services. Our service providers may collect IP addresses for marketing attribution purposes.'

Just launch the app, something that might happen every time you start your desktop (or mobile), and Betternet can record enough information to identify that specific device, and perhaps your city-level location, and you could be giving your real IP away to others. The company may not be recording your browsing history, but there's still a lot more logging than we usually see.

The free version of Betternet has another issue, as third-party companies may use it to display "generic ads." Betternet doesn't share your personal information or browsing history with these companies, but "advertisers may be able to connect certain information independently from you or your device when serving ads... including your device's advertising ID, IMEI, MAC Address and wireless carrier."

Again, this won't enable advertisers to link any action to you as an individual, but it's enough for them to recognize your device and perhaps build a record of what you're doing over time.

Does this matter? It depends what you're doing. If you just want to unblock a single website or securely send emails on public wifi, maybe not. But if privacy is your top priority, Betternet doesn't look like a good choice.

Getting started with Betternet's free product is just about as simple as it's possible to be. You don't have to create an account, hand over your email address, come up with a username or remember a password: just download and install the app and you're ready to go.

The Windows client is just as straightforward. Hit the big Connect button, and you're connected to a random US server in a few seconds. Hit Disconnect to close the session when you're done. That's essentially it.

Upgrading is easy, and gets you access to the full set of 70 countries, but there are no major extras.

Settings are limited to a 'Prevent IP leak' checkbox, and an option to automatically turn Betternet on when you access insecure wireless hotspots.

The client is clearly aimed at the novice user who doesn't want any networking complexities to get in their way, and it does that reasonably well. The interface doesn't make any big mistakes, and even the greenest of newbies will figure out what they have to do in seconds. Experts may be frustrated by the lack of features and control, though, especially as you can get far more powerful VPNs for a similar price.

Betternet uses Hotspot Shield's Catapult Hydra protocol to make its connections, meaning our regular OpenVPN and native Windows kill switch tests wouldn't work. We tried a very basic route in killing hydra.exe, though (the process which manages the connection), and watched what happened.

The good news was that the interface updated immediately to show the loss of connection, and the client reconnected within seconds.

The bad news is that there was no desktop notification to alert users, and for a very brief period, perhaps a fraction of a second, our real IP address was visible to the outside world. The client does offer some protection if the VPN drops, and it's better than many, but it's not up to the standard of a full kill switch or firewall.

The story didn't improve with our website unblocking checks. Betternet allowed us to view US YouTube content, but that's one of the easiest of targets, and it had no success for BBC iPlayer or US Netflix.

When Betternet Premium wins out is on performance, no great surprise as it's using Hotspot Shield's speedy servers and efficient Catapult Hydra protocol. UK servers gave us up to 70Mbps, as much as we would expect to see without a VPN. Near European and US servers were little different, and even the less well-connected locations - Vietnam, Cambodia - hit 50Mbps and more. Betternet may cut corners in a lot of areas, but speed isn't one of them.

The positive note continued with our final privacy tests. We checked the service with IPLeak, DoILeak and other sites, but our Windows system had no issues with DNS, WebRTC or other leaks.

Betternet is a fast VPN and very easy to use, but multiple privacy concerns, the distinct shortage of features and the inability to manually set up the service on other devices are real problems. It might just about work for simple tasks, but if you're doing anything serious then we'd look elsewhere.