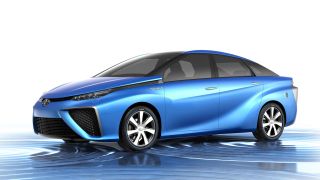 Imagine a day where you’re driving happily along to the gym. You’re feeling pretty chipper and proud that you’ve made the decision.

And then your car tells you to park up early to get some steps in and you crumble inside, knowing that you were actually going to go to the ice cream shop and SOMEHOW IT KNEW.

That’s the future Toyota wants to patent, with your vehicle giving you delightfully loving suggestions about ways in which you can become a healthier person.

While it won’t be able to use any kind of psychic power (because, come on, this isn’t how we would be telling you if it was a new feature) it can work out your health goals and give you tips on how to meet them.

It seems that the patent is pretty basic in that help right now: it’ll talk to your ‘portable communication device’ (let’s be honest here: phone) and then work out how far you’ve got left on your health goal.

By using data to work out where you’re going to park (whether that’s programmed in or just using analysis to see your hotspots) it’ll then suggest earlier spots to get you walking that little bit further and arriving where you want to go a touch healthier.

In theory, it sounds like a great idea. Your car and phone combining to give easy hints about ways you can sneak in some health amidst your normal day. But in reality, it’ll be another annoyance, falling into the same category as your ire at the GODDAMN move notifications on every wearable you’ve ever touched.

The future, guys. It’ll annoy us into submission.