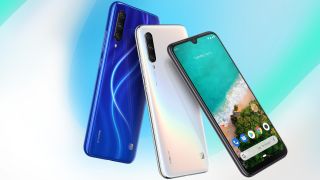 Just within a few hours of Xiaomi announcing its brand new Redmi K20 series in India, its Spain arm has unveiled the Mi A3. Succeeding the Mi A2 which is one of the most popular mid-range smartphones from 2018, the Mi A3 has received a full transformation, in line with Xiaomi's other smartphones form this year.

The Mi A3 flaunts its glass back which comes in three gradient finishes-- white, grey and blue. The back of the phone curves around the edges and is topped with a layer of Gorilla Glass 5 on both the front and back. It uses a 6-inch AMOLED panel flush with u-shaped notch which gives the screen a 19.5:9 aspect ratio. However, there is a caveat. The screen has a HD+ (1560 x 720 pixels) resolution which is sure a major trade-off, especially if you consider the fact that Mi A2 has a Full HD display. It is also home to an in-screen fingerprint sensor.

It is powered by Qualcomm Snapdragon 665 SoC with an octa-core CPU and Adreno 610 GPU. This is paired with 4GB of RAM and 64GB/128GB storage options. The phone supports storage expansion via microSD card by upto 256GB. Being a part of Google's Android One program, the A3 runs on stock Android 9.0 Pie.

Mi A3 has a triple camera setup which consists of a primary 48MP sensor, an 8MP ultra-wide camera and a 2MP depth sensor. The rear cameras are capable of recording 4K footage at 30fps and is supported by EIS. On the front, you get a 32MP selfie camera with an f/2.0 aperture.

The phone is fitted with a 4,030mAh battery and supports 18W fast charging.