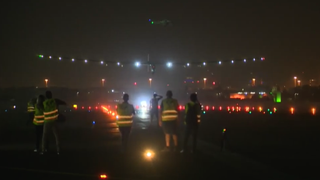 In the dim pre-dawn light at Al Bateen Executive Airport in Abu Dhabi this morning, history was made.

As pilot Bertrand Piccard eased the wheels of Solar Impulse 2 down onto the tarmac, it became the first aircraft to successfully circumnavigate the globe under solar power alone.

The plane is a remarkable creation - 17,000 solar cells cover its 72-metre wingspan, with four-metre propellers driven by electric motors under the wings.

The historic voyage began in Abu Dhabi on 9 March last year, though it had been in the works for more than ten years.

The flight was undertaken alternately by Piccard and his co-pilot Andre Borschberg in 17 stages, crossing four continents, three seas and two oceans.

The longest stage, from Nagoya in Japan to Hawaii, lasted almost 118 hours. Alone and crammed inside a cockpit the size of a phone box, Borschberg was only allowed to sleep for 20 minutes at a time.

That Japan-Hawaii leg set a world record for the longest uninterrupted solo flight, one of 19 official aviation records set during the trip, but it also inflicted major damage to the plane's batteries.

As a result, the plane was grounded for ten months while repairs were undertaken.

But it kicked off again this year, and since March the team has been slowly making its way across the rest of the Pacific, the United States, the Atlantic, and North Africa.

The plane's light weight makes it extremely sensitive to weather conditions - and the final voyage from Cairo encountered severe turbulence above the Saudi desert.

But Piccard, who comes from a family of explorers, landed safely. He paused on the tarmac and looked at the cheering crowds, saying: "The future is clean. The future is you. The future is now. Let's take it further."