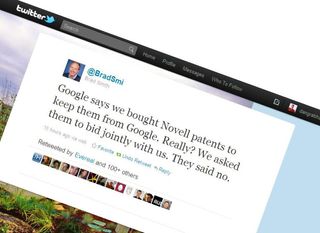 Microsoft's Brad Smith made his views clear on Twitter

Tape up your monitors and put on your tin hats: a tech war is brewing, and your gadgets could be caught in the crossfire.

Google's on the warpath, Apple's in its sights and Microsoft is already fighting back.

The battle has been brewing for a while, and it's all about patents: if your device or program does something that another company has patented, your device manufacturer or software creator needs to pay the patent owner some money. As we reported earlier this month, that poses a particular problem for Google's Android:

"Google has a relatively low number of Android-related patents", which some observers believe makes Android a "suit magnet". For example, "Apple has just been granted a patent that effectively means it owns the multitouch gestures it pioneered, which means it could demand licensing fees from its rivals."

Google's chief legal officer David Drummond says that Google's rivals are waging "a hostile, organized campaign against Android" via "bogus patents". "A smartphone might involve as many as 250,000 (largely questionable) patent claims," he says, "and our competitors want to impose a 'tax' for these dubious patents that makes Android devices more expensive for consumers."

"We asked them to bid with us"

That may be true, but one of Google's biggest other claims isn't: in the same blog post, Drummond says that "they're doing this by banding together to acquire Novell's old patents... and Nortel's old patents... to make sure Google didn't get them."

That's not how Microsoft legal boss Brad Smith remembers it. "Google says we bought Novell patents to keep them from Google. Really? We asked them to bid jointly with us. They said no," he tweeted.

To make things worse, Microsoft head of communications Frank X Shaw tweeted a photo of an email from Google's Kent Walker, which said "after talking with people here, it sounds as though for various reasons a joint bid wouldn't be advisable for us on this one... we're open to discussing similar opportunities in the future".

Clearly Google isn't an innocent victim here - it moans that the Nortel patent portfolio went for $4.5 billion, "nearly five times larger than the pre-auction estimate", but neglects to mention its own bid of $4 billion; it accuses rivals of ganging up on it, when it clearly considered teaming up with Microsoft to gang up on others - so what on earth is going on?

Google provided the answer back in April, when Kent Walker blogged: "as things stand today, one of a company's best defenses against [patent] litigation is (ironically) to have a formidable patent portfolio".

Google would bid for the Nortel Patent portfolio, Walker wrote, because "we hope this portfolio will not only create a disincentive for others to sue Google, but also help us, our partners and the open source community... continue to innovate."

In other words: "If we don't get ourselves some decent patents, we're stuffed."

Google on the back foot

Google missed out on around six thousand patents when it didn't get the Nortel portfolio; now, it's eyeing the even bigger InterDigital portfolio at the same time as Apple, Samsung and "other potential bidders". The winner stands to get "about 8,800 patents on inventions used in devices ranging from the iPhone to Google's Android-based handsets and RIM's BlackBerry," Bloomberg reports.

Google has repeatedly been criticised for its apparent disinterest in patents - its portfolio is tiny compared to Apple's and Microsoft's - and it seems that the search giant has belatedly woken up: Android's key competitive advantage is that Google gives it away for free, undercutting Windows Phone and helping firms compete with Apple.

Other firms' patent portfolios could threaten that by forcing Google or its partners to pay hefty licensing fees for Android.

"Google hinted in its blog post that 'these deals are likely to draw regulatory scrutiny', which suggests that it has its legal teams raring to fight any patent claims tooth and nail," we reported on Thursday, and its somewhat misleading blog post suggests it wants to try patents in the court of public opinion too.

Google already appears to be playing dirty, and we suspect things are only going to get more heated. As Kate Solomon puts it: "Who can really be the winner in this great patent war? Not, we suspect, the buyers of phones."