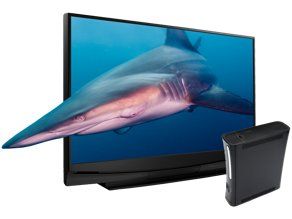 Look and touch! Just watch out for the teeth

Japanese scientists have come up with an interesting new type of 3D viewing, one where you can actually touch what you see.

Using, among other things, Nintendo Wii-mote controllers, the scientists have found a way to interact with 3D images which feels like you are actually touching objects.

The Wii-mote controllers are there to track movement and ultra-sound is used to apply what feels like pressure to the user.

Let there be light

So far, according to Reuters, the technology has only been tested on rather small things but its creators are hoping to use the tech to create things like virtual light switches for hospitals, where touching objects can spread viruses.

"Up until now, holography has been for the eyes only, and if you'd try to touch it, your hand would go right through," Hiroyuki Shinoda, one of the developers of the technology, to Reuters.

"But now we have a technology that also adds the sensation of touch to holograms."

While there's no word with regards of how this technology could be used a home-entertainment sense, if something like Project Natal were to combine 3D and touch sensitivity, then that could make for a very interesting gaming experience. Here's hoping!