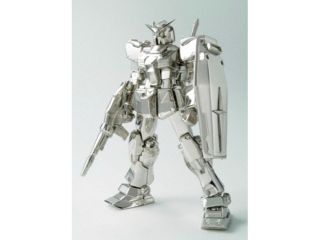 If it's bling you're after, then Japan is clearly the place to be this week, with the latest addition to the line-up of garish technology-related products a 5-inch tall solid-platinum replica robot.

Toy firm Bandai commissioned Tokyo jeweller Ginza Tanaka to create a platinum version of its popular Gundam robot in a bid to create awareness outside Japan of the 30-year old toy. Two years later, the result is a ¥30 million (£130,000), 1.4kg Gundam with 89 moving parts and a diamond for a topknot.

The platinum Gundam will go on display at the Baselworld Watch and Jewellery Show in Switzerland next month, so we hope at least some of those mini robotic armaments are in working order.