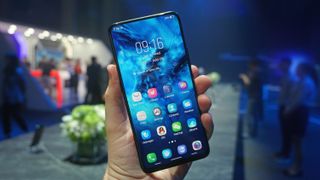 The much talked-about Vivo Nex is now launched in India. The phone that made it to the headlines for its out of the box design, where Vivo took the chance and ditch the in-trend notch on top of the display. To find a new place for the camera and achieve this incredible screen to body ratio, Vivo got creative to bring the old motorised tech and fit in a pop-up camera on top of the phone. Also, it retains the in-display fingerprint sensor that we’ve seen on the Vivo X21 earlier.

The company also launched a Snapdragon 710 powered Nex A variant in China, but only the high-end Nex S variant has made it to Indian market. As mentioned, the highlight stays it’s notch-less immersive display and the cool-quotient of the pop-up selfie camera, which automatically comes out and goes in when you access the camera app. The pop-up camera is controlled by precise micro-stepping motors paired with independent drive ICs and precision control algorithms.

But that’s not all about the Vivo Nex

It’s impressive that Vivo, for the first time in India, has opted to bring the industry-leading hardware to their flagship phone at a price that's reasonable. It has the Qualcomm Snapdragon 845 chipset with 8GB of RAM and 128GB of storage. It’s also got a whopping 91.24% screen to body ratio having a 6.59-inch with full HD+ resolution.

It is powered by a 4000mAh battery with 22.5W fast charging support. Having all this packed in a premium looking shell costs Rs 44,990, which seems like a great price when compared to it’s rival Oppo Find X, which costs Rs 59,990. The hardware is almost the same on both phones, although Oppo has found a better implementation of tech to reside the front camera. Further, the Vivo Nex also competes against the OnePlus 6, which touts a notch on the display and has a similar set of configuration in terms of hardware. But again, the Oxygen OS on top of Android Oreo does a much better job than Vivo's own custom UI on the Nex.

The Vivo Nex has been priced at Rs. 44,990 and will be available exclusively on Amazon from today and it will also be available on the company’s website starting July 21.