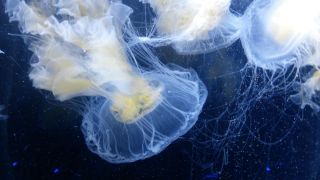 Most prototypes of electronic skin that have been developed over the last decade or so are designed to sense only light pressure. The sensor that recognises when the skin is being touched doesn't respond effectively to harder impacts. In some cases they just break.

So engineers at the Huazhong University of Science and Technology have developed a system that could let robots know when they're hit hard enough to potentially cause damage. And it's inspired by jellyfish.

To be specific, the Atolla jellyfish - which lives in the deep ocean and flashes its bioluminescent organs dramatically when it senses danger based on changes in water pressure.

Bin Hu and his team built on that idea of a visual warning of a physical threat to develop a system that lights up when it's damaged. It's made of two layers that allow it to detect slight pressures - like a leaf or a breeze - as normal.

But between the layers is another that's embedded with phosphorescent materials which glow brighter and brighter as physical force increases. Being able to sense a wider range of pressures, the researchers say, makes the system more like human skin.

"Mimicking the pressure-sensing behavior of biological skins using electronic devices has profound implications for prosthetics and medicine," wrote the researchers in a paper published in ACS Applied Materials and Interfaces.

"Its mechanically robust and stretchable properties may find a wide range of applications in intelligent robots."