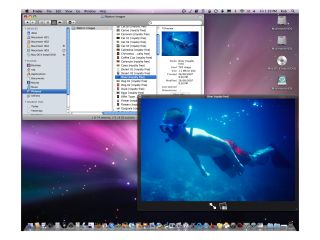 A massive 400MB update for Mac OS X 10.5 Leopard is imminent. Are you as unbelieveably tense with excitement / worry as we are?

Friday came and went, Monday's nearly over and there's still no sign of Mac OS X 10.5.2 - the rumoured 400MB update to Leopard, the latest version of Apple's operating system, and the biggest point release in Apple OS history.

The delay is easily explained by the fact that Apple is still releasing new builds to developers (the build is now up to 9C23, up from 9C20

). There are still no known issues.

This momentary delay may evoke a smidgen of sympathy for Windows Vista users who not only had to wait five years for an 'upgrade' from Windows XP, but have now sweated for over a year while waiting on the first official Service Pack.

Looks like Apple will get there first again too.

Not that Mac OS X 10.5 Leopard has been perfect. Mac users have been complaining long and loud about bugs and missing features in their OS - hence the massive update.