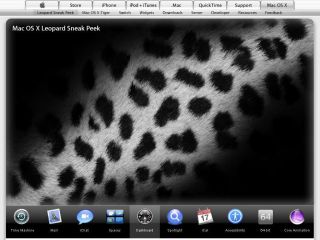 It has some problems, but a new build of Mac OS X Leopard is on the way

Are the Leopard bugs getting you down? Are you tired of the random shutdowns or poor handling of PDF files? Are you enraged at the operating system's spotty attachment handling? If so, you'll be happy to know that reports from last week's Macworld suggest an update is coming.

According to Mac Rumors, the new update to Leopard - Mac OS X 10.5.2 - should be released sometime next month and will include up to 100 fixes that range from code corrections to general enhancements.

The newest build of Mac OS X 10.5.2 was privately released to developers at Macworld event. They have been asked by Apple to test it broadly so that the new update will address as many problems as possible. So far, no word has leaked regarding the breadth of the new build, but it's rumoured that the Time Machine patches create a much better experience.

Apple has yet to announce a firm date of release for the update, but it's widely speculated that the company is looking to release it by the middle of February.