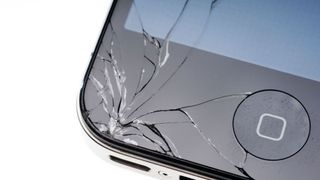 As far-fetched as it may seem, scientists have been toying around with the idea of self-repairing smartphone screens for a few years now, but only a few devices, such as the curved LG G Flex 2, have taken the tech seriously.

Now, though, scientists from the University of Tokyo have published a fascinating study in Science describing a new polymer for self-repairing smartphone screens.

This one looks more promising than some of the previous efforts. Should you drop your phone and crack the screen, the polymer needs no interaction other than pressure from your fingers to clear up the cracks. Take that, $249 screen repairs.

It's called 'polyether-thioureas', which admittedly doesn't roll off the tongue as well as, say, Gorilla Glass. Many other types of 'self-healing' glass require some kind of heat, but this new polymer can be repaired at room temperature just by pressing down on it with your hand.

As with many of the best discoveries, the polymer was discovered by accident, The Guardian reports. University of Tokyo graduate student Yu Yanagisawa was planning on making the substance into a glue, but discovered the polymer's strange qualities after noticing the edges would bond again after being cut. Even better (for our purposes), the sheets would regain their original strength within a couple of hours.

Yanagisawa sees such materials as essential for reducing the waste associated with traditional smartphone repairs.

“I hope the repairable glass becomes a new environment-friendly material that avoids the need to be thrown away if broken," he said.

The big question is whether this new material can conduct electricity, which is important in an age when many smartphones have electrodes underneath the screen that track your touches. This lack of conduction was why the 'self-healing' materials on the LG G Flex 2 were only used for the case rather than the screen.

The discovery comes a little over half a year after researchers at the University of California, Riverside discovered another, similar polymer that could be stretched to 50 times its original size and could stitch itself back together within a day.

In a statement to Business Insider at the time, project lead Chao Wang expressed high hopes for the material, predicting that it would appear in phones by 2020.

"Within three years, more self-healing products will go to market and change our everyday life, " he said. "It will make our cellphones achieve much better performance than what they can achieve right now."