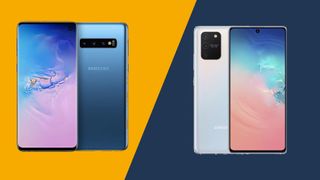 Samsung released a ‘Lite’ version of the Galaxy S10, 11 months after the original device debuted, in a surprise product reveal. Phone fans were shocked, both by the existence of this new and unexpected phone, and its timing so far from the original’s launch but only a month before the expected reveal of the Galaxy S11.

The new phone is the Samsung Galaxy S10 Lite in name but perhaps not in specs, as it has a few improvements over the base Galaxy S10 that you probably wouldn’t expect from its title.

So what are these differences, and how do the phones stack up? Is the Samsung Galaxy S10 the obvious choice to go for if you’re looking for a new phone, or is the Galaxy S10 Lite a valiant contender? We’ll run through the specs and features of the two phones to help you work it out.

It’s worth pointing out, though, that between the release of the S10 and S10 Lite the former’s price dropped, and depending on outlet and storage option, you can pick it up for up to $200 / £150 / AU$300 less than it debuted.

We don’t actually know the price of the Galaxy S10 Lite just yet (although we’ll be sure to update this article when we find out), but we can make an educated guess thanks to the fact there already was a cheaper version of the S10, in the form of the Samsung Galaxy S10e.

While the Samsung Galaxy S10 looked similar to its contemporary siblings, the S10e and S10 Plus, the S10 Lite is visibly different; this is mainly due to the fact that the cameras in the first three are housed in a horizontal bar across the center of the device, whereas the S10 Lite has its snappers in a square block in the top left of the phone’s rear.

The Galaxy S10 Lite is noticeably heavier than its non-Lite counterpart, weighing 186g instead of 157g, and it’s quite a lot bigger too with a 6.7-inch screen rather than a 6.1-inch display. In fact, in terms of screen size the S10 Lite is the joint biggest S10 phone, matching the Samsung Galaxy S10 5G.

One intriguing discrepancy between the two phones is the fact that the Samsung Galaxy S10 has a 3.5mm headphone jack, but the Galaxy S10 Lite doesn't. Seeing as the Lite is meant to be the affordable device, this omission is odd, as while premium devices often drop the port, more budget phones often retain it.

Despite being a ‘Lite’ (affordable) phone, the Galaxy S10 Lite has an in-screen fingerprint scanner like its non-Lite relative, so there are no physical fingerprint sensors to be seen on either phone.

The Galaxy S10 has a screen that’s curved at the sides, but the S10 Lite has a flat display with a thin but apparent bezel around the edges. The S10’s design therefore looks noticeably more premium, although curved screens aren’t to everyone’s taste.

Something also shared between both phones is a punch-hole cut-out in the screen for the front-facing cameras, but while the Galaxy S10 has its in the top-right corner, the S10 Lite’s is central, just like in the Galaxy Note 10.

Talking of the screens, we’ve already explored the sizes, but the Galaxy S10’s is Dynamic AMOLED while the S10 Lite has a Super AMOLED Plus panel.

We’re not actually sure what this means, as Samsung’s AMOLED names are as much marketing buzzwords as they are technological changes, but when Samsung used the same Super AMOLED Plus name for the Galaxy S2 screen, it resulted in a panel that was bright and energy efficient, so that could be the case here too.

That said, if it really is the same tech as is used in the Galaxy S2, then it's a much older version of the AMOLED technology than is used by the standard Galaxy S10.

The Galaxy S10 has a resolution of 1440 x 3040, while the S10 Lite is 1080 x 2400, and in combination with the different screen sizes that means the former has a pixel density that’s much higher than the latter. So content will appear sharper on the Galaxy S10, although the S10 Lite’s bigger screen may be preferable to some.

There’s a pretty significant camera change from the Samsung Galaxy S10 to the Galaxy S10 Lite. In fact, the only thing they share in common is that they have three rear cameras.

The Galaxy S10 has 12MP main, 12MP telephoto and 16MP ultra-wide cameras, while the Galaxy S10 Lite has 48MP main, 12MP ultra-wide and 5MP macro snappers. Does that 48MP camera make the latter sound better? Well, it has actually got a smaller pixel size, so images might not actually be as good as the S10 in low light situations.

The change from telephoto to macro is an intriguing one, but it makes your buying decision easier. If you want to take close-up pictures of small things, the Lite is going to be better with its macro lens, but if distance pictures are more your thing, you’re going to need the S10’s telephoto lens.

Samsung phones are generally pretty good for photography, so while we haven’t tested the S10 Lite's cameras yet, it's likely to be almost as good as the S10 for taking pictures. Samsung’s post-processing software is the real champion, after all.

The Samsung Galaxy S10 has a 3,400mAh battery which is, admittedly, a little on the small side, although thanks to its smaller screen size it got through a day just fine. If you want plenty of battery life, though, the Galaxy S10 Lite’s 4,500mAh one would likely be much better.

Both devices have fast-charging, clocking in at 15W in the Galaxy S10 and likely the same in the S10 Lite, though that's yet to be confirmed. However the Lite is missing wireless charging, which is present in the Galaxy S10, so if you’re a fan of powering your device up without a plug, you’ll be missing out with the Lite.

The Galaxy S10 Lite also has no Wireless PowerShare function, which lets you use the handset as a wireless charger for other phones and devices. This can be quite useful for people who have earbuds or smartwatches that charge wirelessly, so the standard S10 - which does have this feature - might be preferable to some people.

Samsung hasn't confirmed what chipset the Samsung Galaxy S10 Lite is using at the time of writing, but from the specs we do know, it looks highly likely to be the same processor as the Galaxy S10, a Snapdragon 855.

Well, the Galaxy S10 had a similar Exynos 9820 in certain parts of the world, but the S10 Lite could stick with the Snapdragon chipset everywhere.

The RAM is similar too, as the Galaxy S10 had 8GB but the S10 Lite will come with either 6GB or 8GB, depending on which option you opt for (though it remains to be seen whether both versions will be offered everywhere).

The Galaxy S10 came with Android 9 which can be upgraded to Android 10, but the S10 Lite comes with this newer operating system installed out of the box. That’s not a huge reason to buy one over the other, but you’ll need to spend a little time updating the former before you get the best experience.

Both devices have Samsung’s One UI overlay, which is mainly an aesthetic change, but comes with a few different Samsung apps and bonuses too.

You’re mainly getting the same device in terms of features and specs whether you opt for the Samsung Galaxy S10 or Galaxy S10 Lite; at least, they’re the same on paper, although we’ll need to test the S10 Lite out thoroughly to see if there are any big differences between the two when it comes to normal use.

We really need to know the price of the Galaxy S10 Lite before we can truly recommend one phone over the other, but for now we can make broad assessments about the differences between the two phones.

The Samsung Galaxy S10 Lite has a lot in common with its namesake and it’s bigger too, but the screen isn’t as sharp, the cameras might not end up taking as great pictures (thanks to that pixel size problem), and its huge size might actually put off people with smaller hands.

The Samsung Galaxy S10 may be smaller but it’s a little more high-end too, with its high-res screen, great camera array and curved display, which lends itself to a better-looking design.