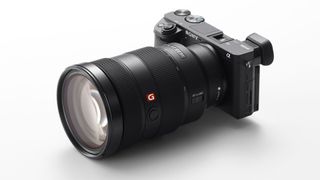 Sony has been on a hot streak, introducing the world's first full frame mirrorless cameras with its A7 lineup, but it hasn't forgotten about its APS-C family and now it's introduced a new Sony A6300. This is clearly aimed at serious/enthusiast photographers, a sign that Sony is aiming for the high ground with its latest cameras.

The new Sony A6300 features a 24.2MP sensor with copper wiring to improve light collection efficiency and readout speed. The sensor works in conjunction with a BIONZ X processor to deliver sensitivity settings up to ISO 51,200.

The A6300 is also capable of 11fps continuous shooting or 8fps while using the new and improved electronic viewfinder. The autofocus system includes a new "high-density" tracking AF system for subject tracking, which uses a large number of AF points around the subject to track its motion more effectively.

On the video front, the A6300 full delivers with built-in 4K video recording that captures video in a Super 35mm format. Other professional caliber video features include the ability to record Full HD at 120fps

Additionally, the camera will focus approximately twice as fast as its predecessor during movie shooting thanks to its new and improved AF system. AF speed and AF tracking sensitivity are also adjustable for expanded creativity.

In addition to the new A6300, Sony has also announced a whole new line of full frame lenses designed for enthusiast and professional photographers.

The new G-Master lenses all feature newly developed XA (extremely aspherical) glass elements cut to a precise 0.01 microns for the best quality in resolution and bokeh (or out of focus areas).