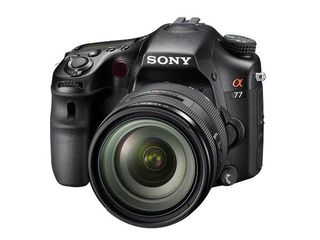 The successor to the a700, the a77 features a host of new features

Sony has introduced the long awaited successor to the a700, the a77.

Boasting the world's fastest continuous AF shooting performance, the a77 is capable of capturing full resolution images at 12 frames per second with full-time phase-detection autofocus.

A newly-developed 19 point autofocus system with 11 cross sensors is also included. Tracking Focus is designed to retain accurate focus lock on a moving subject, even if the subject is momentarily obscured.

Release time of the camera is ultraquick, with a new electronic front shutter curtain the cuts lag time down to 0.050 seconds.

The a77 features a newly-developed Exmor APS HD CMOS sensor with a 24.3 effective megapixel resolution. The latest revision of Sony's BIONZ image processing engine is added and designed for speed.

Detailed shooting information can be displayed, while the adjusting of exposure, white balance and other settings are previewed at real time in the Tru-Finder. Fine focus tweaks can also be confirmed via a zoomed-in portion of the image.

The Smart Teleconverter displays an enlarged central portion of the image sensor, which allows for 12 megapixel captures with a digital zoom factor of 1.4 or 2x.

Stills and video can be composed and reviewed on the rear adjustable angle 7.5cm (3 inch) Xtra Fine 921k dot LCD TruBlack screen. The a77 also introduces the world's first 3-way adjustable screen that tilts and pivots.

Capable of shooting Full HD video, movies can be shot with quick AF. Because of the translucent mirror, phase detection maintains accurate focus, even of moving subjects.

Full HD video is now supported at 50p (progressive) frame rates, a first for APS-C sensor cameras. Manual focusing and the ability to shoot in P/A/S/M exposure modes has also been added.

The a77 features double control dials and a seperate top-mounted LCD data display. The body is constructed from magnesium alloy panels and key controls are sealed against the effects of dust and moisture.